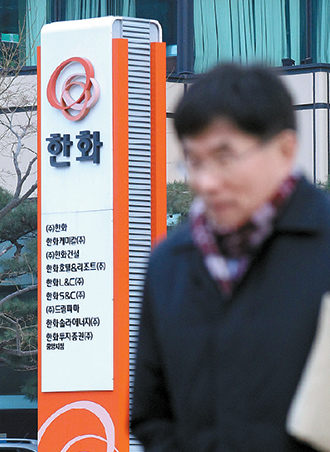 Hanwha Group Chairman Kim Seung-youn failed to show up for his own trial yesterday due to ill health after spending five months in jail on charges of embezzlement and breach of trust. The Seoul High Court said it will summon Kim again on Jan. 21. The Southern District Correctional Service, where Kim is now detained, has asked the court to suspend his prison term as he is suffering respiratory problems and unusual weight gain. According to Hanwha, its chairman has suddenly gained 25 kilograms (55 pounds) and has been suffering symptoms of depression lately. The 60-year-old tycoon, who owns Korea’s 10th largest conglomerate, was sentenced for four years in August 2012 after being convicted of causing a 14.1 billion won loss to the conglomerate and avoiding a 1.5 billion won ($1.41 million) tax bill. He was also fined 5.1 billion won. By Kim Do-hoon