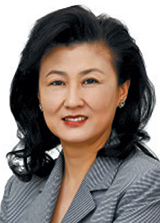 Shirley Yu-Tsui was named the new president of IBM Korea on Sunday.

She previously served as the head of the global business service (GBS) sector at Greater China Group (GCG), a unit under IBM’s growth markets division.

Yu-Tsui was in charge of strategy development, consulting and system integration at GCG and provided IBM’s innovative business solutions to customers in the Greater China market. She has spent 15 years at key posts in IBM in Asia.

She has worked in the IT industry for 28 years and has gained much recognition along the way. She was named as the person of the year in China’s IT Service Sector in 2005.

The company said she will foster new growth at IBM Korea by enhancing its global capacity through her deep insights on the global business, strategic leadership and a wide range of experience in sales and services.