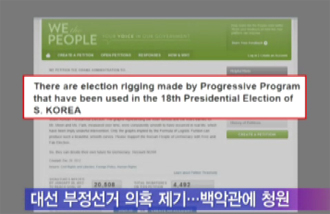 A demonstration took place Saturday in front of the Deoksu Palace in central Seoul by people challenging the outcome of the Dec. 19 election. About 300 people gathered to demand the National Election Commission recount the ballots. They said suspicions were growing that the election was rigged.

The Saenuri Party’s candidate won a narrow victory against her Democratic United Party rival of about 1.08 million votes (3.53 percent).

On the Daum portal site, an online petition began on Dec. 21 to demand that the ballots be recounted by hand, not by machines. As of yesterday, more than 226,000 people signed the petition. The goal is 1 million signatures.

Some Internet users sent messages to the United Nations’ Twitter account to express skepticism about the outcome.

An online petition was also posted on the “We the People” site of the White House. On Dec. 29, an Internet user posted the petition and asked the U.S. government to support the manual recount of the ballots.

The National Election Commission issued a statement on Jan. 1 saying the suspicions of election rigging were groundless.

“The National Election Commission has done its best to have a fair presidential election,” it said.

“From the start of setting up polling stations until the end of voting, the entire process was watched by observers representing the candidates,” the commission said. “We installed electronic chips in the ballot boxes and even paid transportation expenses of the observers when the boxes were moved for counting.”

The commission said the electronic counting machines were not linked online so hacking of the ballot counting was impossible.

“Most importantly, the electronic counting was not the final outcome,” it said. “The ballots were then recounted manually and observers confirmed the process. It is, therefore, impossible to rig the outcome through the ballot counting machines.”

The commission said it is prepared if the ballots need to be recounted, but asked the public to not raise suspicious without grounds. “Now is the time to accept the outcome and unite for national unity,” the commission said.

A group of Internet users and civic activists formed a group and filed a suit against the chairman of the National Election Commission on Friday to nullify the election outcome.

Article 222 of the Public Official Election Act stipulates that in a presidential election, “an elector, political party [limited to a political party which has recommended a candidate], or candidate that has an objection to the validity of the election may file a lawsuit with the Supreme Court against the chairperson of the constituency election commission concerned within 30 days of Election Day.”

Article 225 says any petition or lawsuit on an election should be judged within 180 days of its filing.

The DUP, meanwhile, appeared to face a dilemma over the recount. While some members, including former floor leader Representative Park Jie-won, said the party could make a request for the ballots to be recounted, most of the Democrats said it was not a simple matter.

For a presidential election recount, a political party or a candidate can make a formal request - and the petitioner must pay the costs of the recount.

Representative Yun Kwan-seok, a spokesman of the DUP, tried to keep a distance from the controversy. “The candidate already accepted defeat,” said Yun. “We believe the National Election Commission will handle the situation fairly under law and principles.”

In 2002, the Grand National Party (GNP), the predecessor of the Saenuri Party, demanded a recount after its candidate Lee Hoi-chang lost to Roh Moo-hyun by 570,000 votes. The Supreme Court conducted a recounting at 80 electoral districts in January 2003.

Nearly 11.5 million ballots were recounted but less than 0.01 percent were reversed. The GNP spent 680 million won ($639,000) on the recount, and ultimately apologized for it.