Public in uproar after details of budget disclosed

Public in uproar after details of budget disclosed 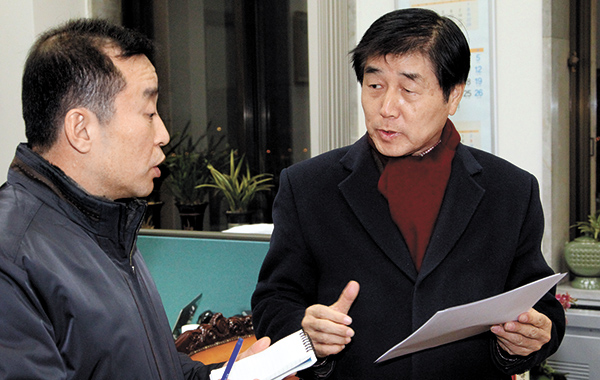 Representative Chang Yoon-seok, right, chairman of the Assembly’s Special Committee on Budget and Accounts, receives a briefing from an aide on Sunday after returning earlier from his trip to Latin America. By Kim Kyung-bin


President-elect Park Geun-hye yesterday urged lawmakers to end their yearly failure to pass a budget in time as the ruling and opposition parties made promises to get their acts together.

“The National Assembly and the administration must work together to make sure that the budget approval won’t fall behind the yearly deadline,” Park was quoted as saying yesterday by Yoon Chang-jung, spokesman of her transition team. “We must correct the wrongful customs and systems of our society one by one. The latest budget passage is an example. The people were deeply concerned and criticisms were high.”

After protracted deliberations between ruling and opposition parties, the National Assembly approved a 342 trillion won ($321 billion) government budget for 2013 at 6 a.m. on Jan. 1. 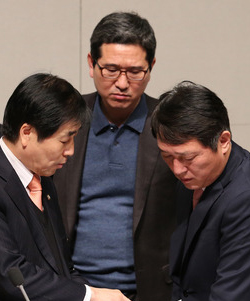 It was the first time ever that the legislature wasn’t able to pass a budget bill before the end of the year.

The statutory deadline for budget approval was, in fact, Dec. 2, but the legislature has failed to meet that deadline over the past decade. The practical deadline, therefore, was considered Dec. 31.

During her presidential campaign, Park made a pledge that budget appropriations will be made a routine operation of the legislature.

Lawmakers were also criticized for having secret negotiations on this year’s budget to allocate pork-barreling money to their own districts. The criticism reached a new peak when the JoongAng Ilbo reported last week that a group of lawmakers hopped on airplanes shortly after the budget’s passage for Latin America and Africa for a government-paid junket that they described as a research trip to see how other countries like Zimbabwe and Costa Rica do their budget appropriations.

In the face of snowballing public criticism, the leaderships of the ruling and opposition parties promised yesterday to improve the budget deliberation process.

“The National Assembly must present a plan to improve the process,” Saenuri Chairman Hwang Woo-yea said at the party’s leadership meeting. He proposed a publication of Budget Deliberation White Paper and restructuring of the Special Committee on Budget and Accounts.

Representative Lee Hahn-koo, floor leader of the ruling Saenuri Party, told the JoongAng Ilbo yesterday that the party will propose to the opposition party to create a special committee to reform budget deliberations. Lee said it will be separate from the political reform special committee.

Lee also said improving transparency is a key goal. The Assembly’s Special Committee on Budget and Accounts was criticized after news media reported that its Chairman Chang Yoon-seok and the two chief negotiators from the Saenuri Party and the Democratic United Party spent three days in the Lotte Hotel in Seoul and another three days in the Lexington Hotel in Yeouido, western Seoul, to fine-tune the details of the budget.

Based on their secret dealings, about 4 trillion won was added to the budget bill, mostly pork-barrel projects for the districts of the lawmakers on the budget committee and leaders of the two parties.

Lee said it was possible for the two chief negotiators to have secret meetings in hotels because they can decide on the negotiation venue under the current rules. By limiting the chief negotiators’ authorities, Lee said the transparency of the talks will improve. A detailed look at the budget showed that Incheon received 61.5 billion won of additional budget to build a stadium for the 2014 Asian Games.

The electoral district of Lee, the Saenuri floor leader, received 18.2 billion won more in the budget for a feasibility study for local projects.

Three of the nine lawmakers who went overseas after approving pork-barrel additions to the budget cut their trips short and came back home Sunday, four days after the JoongAng Ilbo wrote about their trips.

Representative Chang of the Saenuri Party, who chairs the Special Committee on Budget and Accounts, came back from Mexico, while four other lawmakers who went to Latin America with him remained to complete their schedule.