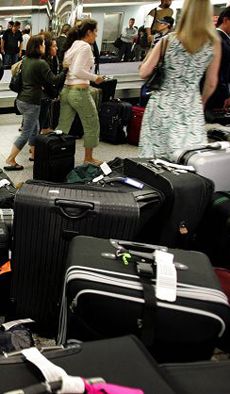 Sohn Jeong-in, a 24-year-old university student studying in the United States, came back to Korea on Christmas Eve to spend the holidays with her family. But the festive spirit quickly dissipated when she found the padlock on her luggage broken and her brother’s Christmas present, a 550,000 won ($520) tablet computer, gone. In its place was a card notifying her of an inspection by the U.S. Transportation Security Administration.

Believing that the tablet had somehow been lost at JFK Airport during the inspection, she reported her story to the airline’s customer service center.

“We’ve contacted the TSA twice, but they notified us that your bag was never inspected,” the airline told Sohn after nine days, saying that she needs to file a complaint directly to the TSA and prove her goods were stolen in order to receive compensation.

After repeated complaints, the airline told her that the theft was her responsibility as it advises people not to put valuables in baggage.

“I have no idea how I’m supposed to get compensation if both the office in charge of the inspection and the airline ignore me like this,” Sohn told the JoongAng Ilbo.

Many similar cases have been reported to airlines. According to Korean Air, passengers traveling from the U.S. to Korea reported 247 potential thefts last year, 279 in 2011 and 270 in 2010, and that the number tends to go up during the holiday season.

“We assume that most of the cases happened at airport customs,” a Korean Air official told the JoongAng Ilbo. “The number of cases has gone up since the 9/11 attacks, as customs officials have been allowed to open passengers’ luggage.”

Under the regulations, a passenger whose belongings go missing can receive compensation from the TSA but this rarely happens, according to Korean Air officials.

“The problem is that it’s too hard to prove it’s the TSA that is responsible for a product’s theft,” said one airline official. In one example of a person actually getting compensation, a Korean passenger eventually did receive 1 million won from the airline for a laptop that went missing from his luggage, and the TSA paid the rest.

According to a report that American TV network ABC received from the TSA last year, a total of 381 TSA officials have been fired for their involvement in thefts at airports since 2003. The report said 29 thefts by TSA officials were reported at Miami Airport, 27 at JFK Airport in New York, and 24 at Los Angeles International Airport. “The only way to solve the problem is to report the case to local police when a person can’t resolve the issue with the TSA,” said an official of the Ministry of Foreign Affairs and Trade.