11 players pack it in under new Chunma coach

11 players pack it in under new Chunma coach 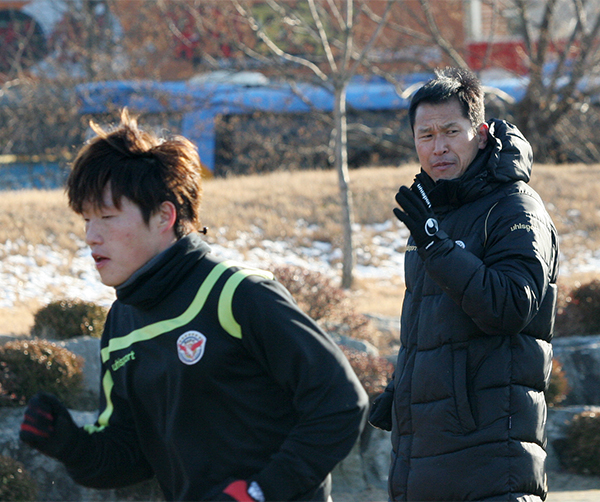 
Eleven Seongnam Chunma players have left the team during the club’s ongoing winter training session, failing either to adjust to the rigorous practices or to impress new head coach An Ik-soo.

An, 47, who headed up Busan I’Park until last month, said it’s a price the team has to pay to revive its legacy. Seongnam has won the country’s top professional league, the K-League Classic, seven times. But it finished 12th of 16 teams last season, suffering another setback after a 10th place finish in 2011.

In this second part of an Ilgan Sports interview series with new K-League coaches, An, who debuted as a player with the Chunma in 1989, said he hopes to lead his “home team” back to the FA Cup.

A. It can be summed up as “change.” We have to improve on the problems we had last year and make a leap forward. I’m stressing to the players the importance of being active, passionate and professional, as well as of sacrifice and responsibility. Change is not made by an individual but as a team.

Can we expect to see your infamous “suffocation football” defensive strategy that you used with Busan?

“Suffocation defense” was a tactic that produced the maximum outcome for Busan. I think it’s become a foundation for the development of football there. It’s been about half a month since I’ve been training with Seongnam. I think I’ll be able to build tactics and systems in sync with the team by early February.

I’ve heard that an icy wind is blowing at Seongnam and that many players have left including captain Kim Sung-hwan. Is that true?

You play football not with words, but with actions. A true professional should be equipped with ability on par with the value of his team. So far, 11 players have packed it in. They’ve been excluded from the team and the chance they’ll return is almost zero. But Kim Sung-hwan, who was excluded due to injury and another reason, may come back this month and there’s flexibility regarding his future course.

What’s your goal for the new season with Seongnam?

I feel a grave responsibility coming back to my home team after 23 years. The goal this year is to win the FA Cup and win a berth to the Asian Football Confederation Champions League.