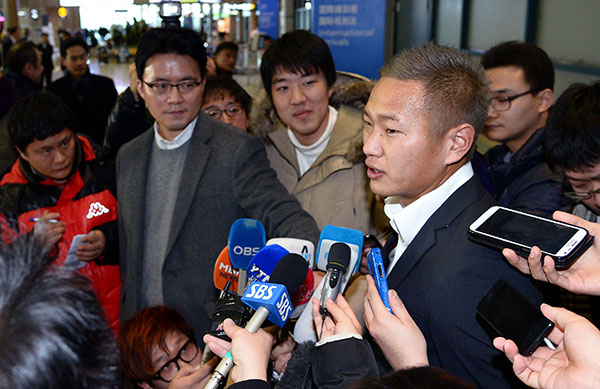 
Jong Tae-se, a rock-solid striker for the North Korean national football team, yesterday expressed his hope to act as a bridge between the two Koreas after arriving in the South to get a medical checkup for his new team, the Suwon Bluewings.

Jong visited South Korea in 2009 as a member of the North Korean team for a 2010 World Cup qualifier between the Koreas, and again in 2010 as a member of J-League club Kawasaki Frontale for an Asian Football Confederation Champions League match against the Seongnam Chunma.

His stay this time would be a long one. Last week, Jong, who currently plays for German club FC Koln, agreed to play for Suwon for three years, according to Bluewings officials.

“There is little difference [on this trip] because of the fact that I’m here as a football player,” Jong, 28, told a swarm of reporters upon his arrival at Incheon International Airport.

“But me playing in a club from the Republic of Korea, I think, is as significant to inter-Korean sports exchange as me playing as a member of the national team of Choson,” he said, referring to a name of North Korea.

“I would like to assume the role of inter-Korean ambassador.”

Jong is the second incumbent member of the North Korean national team to play with a South Korean club after An Yong-hak, a 34-year-old midfielder. An played for Busan I’Park and the Bluewings until 2009.

Suwon officials said the South Korean nationality Jong inherited from his father by birth is still effective regardless of whether he wants it or not. Jong entered the country on a single-entry South Korean passport.

Jong said that ideological differences won’t be an issue on the pitch.

“I was born in Japan, but I would think of me as being from the Republic of Korea when I play in the K-League,” he said. “The South and the North were originally one, weren’t they?”

A Bluewings official said the team has agreed to pay FC Koln 300,000 euros ($394,410) for Jong. He will reportedly receive 400 million won ($376,932) per year from Suwon during the three-year deal. If he passes his physical, he could sign the deal as early as today. The team will introduce him tomorrow, and then take him along for a training session in Guam this month, the official said.

Jong, who has been on the bench for a majority of his stint with FC Koln, said he wants to contribute to a Bluewings’ league win. Suwon are four-time K-League winners but finished fourth last season.

“I’m happy that I will be able to play for Suwon, a traditional, prestigious and strong team,” he said. “I’ve never hoisted the winning cup in my life. With Suwon, I would like to seek the league title with great teammates.” He said he’s determined to score 15 goals in his debut season in the South.

“I’m a striker and there’s no role required of me other than scoring. I think I’ll be able to survive with at least 15 goals.”