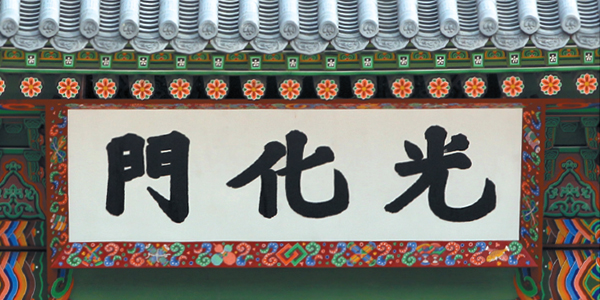 The Chinese-letter signboard of Gwanghwamun that the Korean government decided to restore has triggered controversy in the country. Provided by CHA


Putting an end to a two-year debate, the Cultural Heritage Administration finally gave a verdict on the signboard of Gwanghwamun - the main gate of Gyeongbok Palace and a landmark area in Seoul.

It will remain as it is, in Chinese letters and in the calligraphy painted by Im Tae-young, a Joseon-era middle-ranking government official.

To understand how the debate began in the first place, one has to understand the somewhat strange and slightly complex history of the palace.

Gyeongbok Palace, the main palace during the Joseon era (1392-1910), was destroyed during the Japanese invasion of Korea in the 16th century. It remained in ruins until the 19th century, when King Gojong (1852-1919) restored it. It was then that Im Tae-young, who worked as the restoration manager, made a signboard for the gate.

Former President Park Chung Hee (1917-1979) restored the gate in 1968, but in the same site where the Japanese put it, and put up a Hangeul (Korean alphabet) sign, not the calligraphy made by Im.

At the suggestion of former President Roh Moo-hyun, between 2005 and 2010 Gwanghwamun was restored to its original site and as well as Im’s Chinese-letter sign.

Not long after a crack was found in the restored signboard and controversy arose. Critics questioned, in today’s Korea where Chinese letters are rarely used, if the Chinese-letter signboard is appropriate. Some also alleged that the calligraphy made by the middle-ranking government official is of no significance either.

This prompted the CHA to hold a survey, public hearing and two rounds of debates in the past two years.