Choong Sup Lim weaves a bridge between nature and civilization

Choong Sup Lim weaves a bridge between nature and civilization 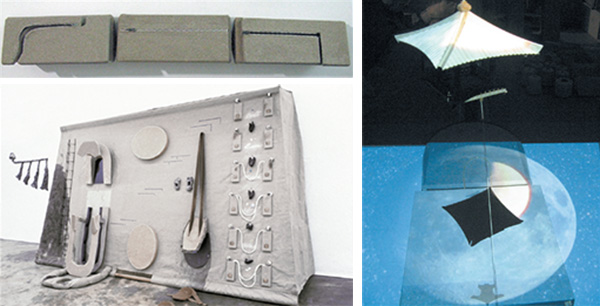 Clockwise from bottom left, “Reversed Tent,” “Sand Zip” triptych and “Wol In Cheon Ji” are part of the ongoing large-scale retrospective of Choong Sup Lim at the National Museum of Contemporary Art in Gwacheon, south of Seoul. The exhibition features about 70 pieces from the 71-year-old artist’s vast oeuvre created between the late 1960s and the present. Though Lim has worked mainly in New York since the early 1970s, his works carry eastern aesthetics and philosophies. Provided by the museum


A room of the National Museum of Contemporary Art in Gwacheon, south of Seoul, is now filled with a giant installation work that riffs off of a traditional loom.

At one end are wooden parts with white threads around them, which resemble the loom’s spindles. At the opposite end is a large pavilion-like structure made of wood and more strands of thread. Between the two ends, in the center of the installation, is a miniature pavilion hanging from the ceiling. On the floor below the pavilion the image of the changing moon is projected.

The work, “Wol In Cheon Ji,” is the highlight of a retrospective of Korean-born New-York-based artist Choong Sup Lim. The title’s English translation, “Luna and Her Thousand Reflections,” is also the title of the retrospective, which features about 70 pieces from the 71-year-old artist’s vast oeuvre created between the late 1960s and the present.

Speaking about “Wol In Cheon Ji,” the artist said, “Thread is made of products from nature but at the same time is a symbol of human civilization. The spinning and weaving done by our ancestors were just like making a connection between nature and civilization.

Lim has held on to such Eastern aesthetics and philosophies, even though he moved to the United States in 1973 and has worked mainly in New York.

Accordingly, Lim’s works in the exhibition, which include paintings, sculptures, found objects, drawings, installations and media art, have consistently achromatic colors and tones.

And many of them carry Eastern philosophies. For example, the installation work “Reversed Tent,” (1997-2000) was inspired by New York’s homeless - not their apparently miserable condition but their inner happiness, which the artist called the “Buddhist happiness” of non-possession.

“Sand-zip” (2008), a triptych of sand panels with zippers in them, are not only beautiful abstract sculptures but also represent the three human stages of birth, living and death, with the zipper lines resembling the shape of mouth voicing “Ah,” “Uh,” and “Uhm.”

The exhibition shows the development of Lim’s work chronologically, from semi-abstraction during the 1970s and ’80s to the found objects of the “Fossil Scape” series and the “Assemblage” series in 2000s.