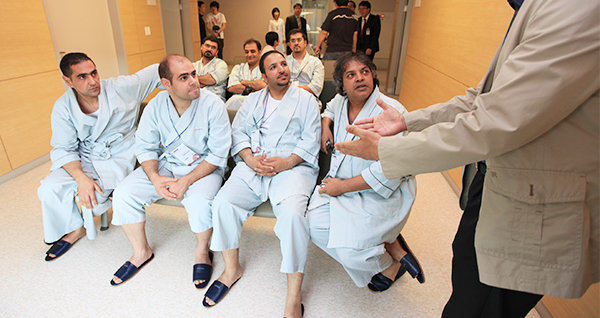 Lately, the number of foreign patients visiting Korean for medical service is growing rapidly. Some 80,000 patients came to Korea in 2010, and by 2011, more than 120,000 sought medical service in Korea. Most of them are from countries in the geographical vicinity such as Russia, Mongolia and China - but the latest surge of patients mostly came from the Middle East - up from 950 in 2010 to 1,800 last year.

The government of the United Arab Emirates (UAE) operates a system of sending citizens overseas on a government budget - for those with conditions that require services that cannot be obtained in the country, such as organ transplants or heart surgery. About 6,000 to 7,000 patients are sent abroad every year, mostly to medically advanced countries such as Germany, the United Kingdom, Singapore and Thailand, which offer high-quality medical services.

After a yearlong negotiation, Korea signed a health care cooperation agreement with the UAE in 2011 and started to receive its patients in December 2011. There have been requests for more than 100 patients so far. In order to promote the service further, we need to make more careful efforts.

First, we should work on publicizing Korea. While the two countries are becoming closer, Korea is still an unknown to the people of the United Arab Emirates. It only takes some eight hours to fly here, but the psychological distance is quite large. Most of the people in the UAE know that Korea is a leader in the automobile and mobile phone industries. But they are still not certain whether it is safe, convenient and reliable for the patients and their families to visit.

Most people who come to Korea have high praise for the country, but it will still take great time and effort to spread the good word. The Korean government and medical service industry should make comprehensive efforts to collaborate with the local media to promote the quality and level of medical service in Korea and to develop products on medical tourism.

Second, we need to become more accommodating culturally. The UAE is one of the most open-minded countries in the Middle East, and most of its citizens are proficient in English. However, to help patients accurately describe their conditions to the doctors and medical professionals, there has to be an interpretation and translation service in Arabic. For those who have chosen an unfamiliar country to receive medical treatment, a kind and considerate guide service should be provided throughout their stay.

It is also essential to provide transportation. When Muslims plan for a trip, properly prepared food and a space for prayer are crucial factors. They need a place to pray and halal food. Also, it is a custom to travel as a family. So while the patient receives medical care, other family members should be provided with chances to visit shopping malls or amusement parks.

Third, we need to pay as much attention to the outbound medical service as the inbound patients. The UAE has been working to bring in hospitals from developed Western countries, but these projects have only been a partial success. While world-class hospitals have opened up their branches in the country, the organization of the medical staff and the quality of medical service are rather unsatisfactory. Therefore, the UAE government hopes Korean hospitals can offer high-quality service and send more competent doctors. We should make a thorough preparation by surveying the market and choosing appropriate partners. But it is worthwhile to seek a new breakthrough in the Korean medical industry from the UAE, which aspires to become a medical hub of the Middle East.

Korea and the United Arab Emirates are developing a strategic partnership, thanks to the export of the nuclear power plant and oilfield development projects. Collaboration in the medical industry would be an important catalyst to expand the contact of the people and businesses of the two countries further.

* The author is the Korean Ambassador to the United Arab Emirates.