Anemic job growth due to continue

Anemic job growth due to continue 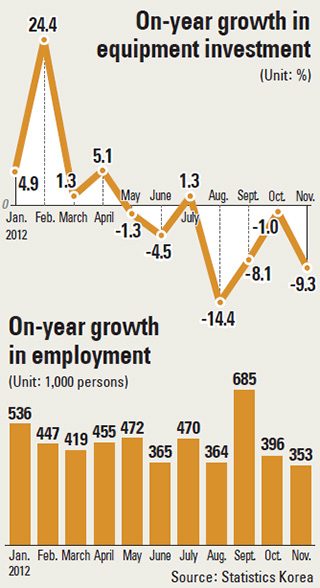 The economy may suffer this year as more companies are expected to cut back on their hiring and investment plans, even though industrial output and private consumption is improving, a government report said yesterday.

The Ministry of Strategy and Finance pointed to sluggish job growth in the labor market as one of the hurdles for the economy in its report on recent economic trends.

“The economy has seen inflation stabilize and major indicators such as production and consumption have posted modest rebounds recently, but job growth and investment remain weak,” the report stated.

In November, the economy added 353,000 jobs compared with a year earlier but the job growth slowed for the second consecutive month according to Statistics Korea. The figure dropped from 396,000 in October.

Facility investment by businesses dropped 9.3 percent on-year in November after falling 1 percent in October, also on-year. The drop was due in part to a decline in spending on transportation equipment.

“Despite a slight improvement in construction investment, overall facility investment has been getting worse and serving as a drag on economic growth,” it said.

According to a recent survey of the country’s top 30 business groups conducted by the JoongAng Ilbo, 22, or 73 percent, of those surveyed have no plans to make new investments this year due to poor business conditions.

Sixteen of the 30 groups predicted that their investments would remain on-par with 2013.

The government expects the economy is likely to grow by at around 3 percent this year, running below its long-term potential growth rate of around 3.8 percent.

Another destabilizing factor is volatile foreign exchange rates, it said. This is the first time since October 2010 that the government has referred to FX volatility as a source of uncertainty in the report.

The local currency has been rising sharply against the U.S. dollar, raising worries that it could hurt exporters and undermine economic growth. The won rose 7.58 percent last year.

The government is also aware of overseas risks stemming from the U.S. and European economies. “Even after the last-minute deal to avert the fiscal cliff, the U.S. economy faces another standoff over raising its debt ceiling, which would affect the global economy once again, including the Korean economy, and uncertainty is also lingering in the euro zone,” the report said.

According to the government’s monthly analysis based on the latest economic indicators, consumer prices grew 1.4 percent in December from a year earlier.

Industrial output expanded 2.3 percent in November from a month earlier. Overall, production improved, with the mining and manufacturing production growing at a faster rate mainly due to an increase in production of semiconductors.