Johnson takes the reins at Kapalua

Johnson takes the reins at Kapalua 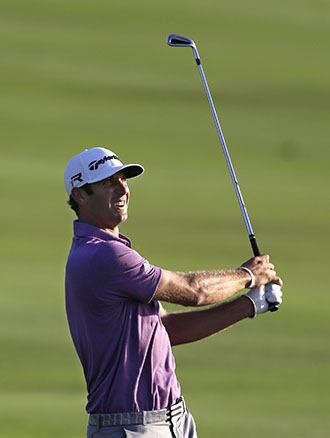 Dustin Johnson watches a shot during the second round at the Tournament of Champions PGA golf tournament Monday, in Kapalua, Hawaii. [AP/YONHAP]

KAPALUA, Hawaii - The Tournament of Champions finally started Monday. At the end of a long day, Dustin Johnson looked ready to end it.

Even though he showed up on Maui a week before the tournament and played six practice rounds, Johnson was among four players who had not even set foot on the Plantation Course at Kapalua for four days because of endless delays. Once he got going, he hardly missed a beat.

Johnson missed only three greens in regulation. Two of his three bogeys came on three-putts from inside 25 feet on perhaps the slowest greens PGA Tour players will see all year. He had seven putts at eagle over 36 holes, four on the back nine of his second round. He converted the last one from 6 feet on his final hole, giving him rounds of 69-66 for a three-shot lead over Steve Stricker.

“I hit the ball really well this afternoon,” Johnson said, who typically makes understatements like this when his game is right where he wants it.

Even his lone bogey of the afternoon round was pretty. He crushed his drive with such force on the 17th hole that it ran through the fairway and into a hazard.

“The way he’s playing, the way he’s striking it, the way he’s controlling his golf ball, it’s pretty good right now,” said Bubba Watson, who played with Johnson. “And I don’t see any different tomorrow from him.”

Three days behind schedule because of high wind, the season started on the day the tournament was supposed to finish. Rickie Fowler made PGA Tour history by hitting the opening shot of the season three times - the first two “opening rounds” had to be scrapped by 40 mile-per-hour gusts roaring down the hills.

Johnson returned some degree of normalcy under warm sunshine and strong wind. He simply overpowered Kapalua, twice driving the green on par 4s, one of them into the wind. He was at 11-under 135, and that lead looms even larger with only one round to play.

A weird week led to a strange sensation - Monday was both the start of the tournament and moving day all in one.

Stricker started the long day wondering if he could even finish. About a month ago, he began feeling a shooting pain down his left side when he shifted his weight in that direction, and he was limping badly coming down the hill on the 18th in the middle of his second round. But from 67 yards away, his pitch rode the slope and wind to perfection and dropped for eagle, and his spirits lifted.

Stricker added a pair of birdies on the front nine and had a 67 to reach 138.

Watson birdied his last hole for a 69 and was four shots out of the lead. Keegan Bradley (69) and Brandt Snedeker (70) were another shot behind.