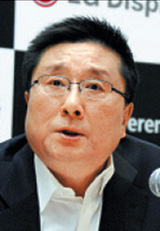 LAS VEGAS - Upbeat about the prospect of large organic light-emitting diode (OLED) panels for televisions, LG Display said it will beef up its investment in facilities to mass-produce these next year.

The leading display producer and its affiliate LG Electronics unleashed the world’s first 55-inch OLED TV on Jan. 2, outpacing their biggest industry rival Samsung Electronics. Samsung is known to be struggling with lower-than-expected production yield, although it has also succeeded in developing the same-size OLED TV.

LG Display CEO Han Sang-beom said in a press conference on Monday, a day before the official opening of the 2013 Consumer Electronics Show, that its OLED production investment expansion plan will be confirmed early next month. The company currently runs a trial production line dubbed “M1” in Paju, Gyeonggi, and the next-generation production line M2 will start operation following approval from the board after it meets in February.

“We came up with a 55-inch OLED TV earlier than our rivals because we are expecting high profitability in the near future,” Han said, adding that the production yield for this size panel has yet to reach 80 percent.

An LG Electronics executive told reporters later in the day that its 55-inch OLED TV, which is only available in Korea and retails for 11 million won ($10,345) has sold 10 units thus far.
Although conceding that the OLED TV market is expected to remain sluggish this year, sales of TVs using this technology are projected to ascend to 700,000 units next year.

In 2015, when the penetration rate is likely to reach 1 percent, three million such TVs will be sold, it said.

When asked whether LG Display would push ahead with both ultra high-definition and OLED TVs, he said consumer demand differs for both. While those who prefer a high-resolution, large screen would most likely go for UHD, those who place a bigger priority on weight and design would prefer OLED.

Han also projected this year is going to see an array of high-end mobile devices with full-HD displays. LG last May introduced a new but yet-to-be-commercialized screen: a 5.5-inch full-HD display with density of 440 pixels per inch (PPI). A higher figure indicates better resolution. That is much higher than Apple’s 326 PPI for the iPhone 5’s retina display.

Industry sources say smartphone producers such as Samsung, LG and Pantech will debut full-HD phones, which are able to display HD images without any modification, in the first quarter. China’s HTC and ZTE have already unveiled products sporting such high-end five-inch displays.