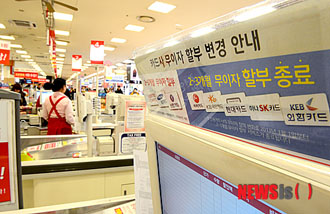 Credit card companies covered most of the interest on the payments previously, but the revised law requires them to split the cost with big businesses, including large retailers. However, many retailers are refusing to cooperate and have stopped accepting the split-payment plans.

This appears to have caused consumption to contract among low-income earners as they battle with an economic slump and high levels of household debt.

According to the industry yesterday, during the first weekend of the year, sales of large discount store chains plunged.

E-Mart, the country’s largest discount store chain, said its sales between Jan. 5-6 decreased by 1.6 percent compared to the first Saturday and Sunday of last year.

“Customers are hesitant to purchase expensive electronic appliances since the interest-free installment payments stopped being accepted,” said a spokesman at E-Mart. “Given the sagging sales in the first weekend of the year, we expect to see a significant decline in sales in the long run.”

E-Mart reported that some of its customers changed their minds at the counter when they found that they had to pay for expensive appliances like TVs, washing machines and refrigerators in one lump sum or pay interest on their installment payments.