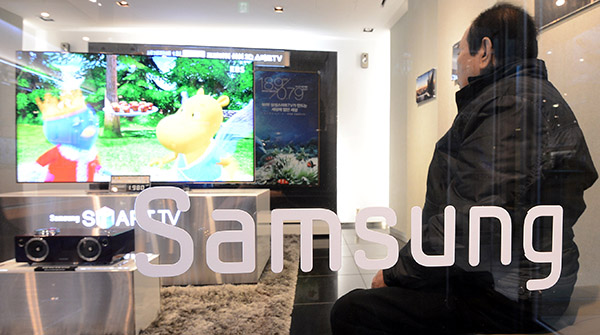 While many local businesses are struggling with the slowdown in the international economy, Samsung Electronics became the first Korean company to post more than 200 trillion won ($188 billion) in annual sales. 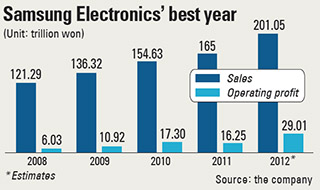 According to a regulatory filing of preliminary estimates made yesterday, the company’s annual revenues for 2012 were 201.05 trillion won, while its operating profits were 29 trillion won last year.

Even in the fourth quarter, when the local economy’s growth was slowing down, and the appreciation of the won was a major problem for other exporters, Samsung Electronics’ overall sales continued to break new records thanks to brisk sales of Galaxy S3 and Note 2 mobile devices in the global market.

Samsung didn’t cite its net profit for the fourth quarter or the year. It will disclose its full earnings including breakdowns for each business unit later this month.

Analysts said continued strong sales of Samsung’s flagship Galaxy S3 smartphone and the Note 2 “phablet,” a hybrid of a phone and tablet computer, are the backbones of the high profits, coupled with improved performance of its memory chip business.

“[The preliminary estimates] are backed by high-end smartphones enjoying strong sales coupled with the improved performance in the semiconductor business helped by increased sales in NAND flash and mobile application processors,” said Park Kang-ho, an analyst at Daishin Securities.

Analysts think the appreciation of the won actually shaved 400 billion won in profits for the company in the fourth quarter.

In a separate but related matter, Strategy Analytics released a forecast that Samsung is expected to widen its lead over Apple in the global smartphone war this year with 35 percent growth in sales of the devices.

“We expect Samsung to slightly extend its lead because of its larger multi-tier product portfolio,” Neil Mawston, executive director at Strategy Analytics, was quoted as saying in an interview with Reuters Saturday.

“It is the latest trend that home appliances are currently being connected through wireless devices [including smartphones],” said Lee Se-chul, an analyst at Meritz Securities. “Samsung runs both home appliance and mobile technology businesses and it’s the company that will take the most advantage of this trend.”

Meanwhile, shares of Korea’s No. 1 company in terms of market capitalization closed at 1,500,000 won yesterday, down 1.32 percent from yesterday.