[INTERVIEW] Copywriter reflects on writing the script for Park campaign

[INTERVIEW] Copywriter reflects on writing the script for Park campaign 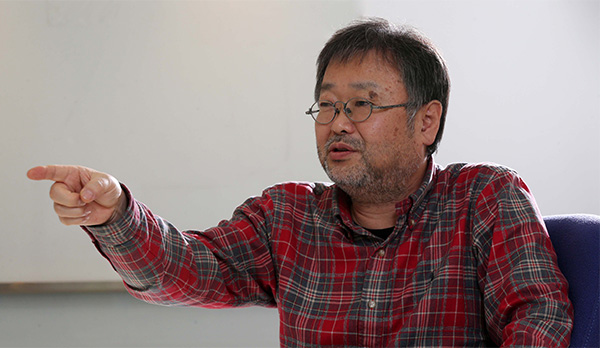 
Jo Dong-won, a well-known copywriter in Korea, has spent his whole life in the advertising field, except for a brief interlude in the film industry when he produced a movie. He recently made a much bigger change by becoming involved in politics and joining the Saenuri Party about a year ago. He always claims to be a fan of “Naneun Ggomsuda,” (“I’m a Petty-Minded Creep”) a hugely popular podcast by far-left liberals that parodies the political circle.

Due to his liberal leanings, he politely declined offers to become more deeply involved with the ruling party, which is conservative, until a close friend finally persuaded him to meet with then-presidential hopeful and now President-elect Park Geun-hye. He said Park told him the party needed people like him in order to succeed as “a pillar of healthy and solid political parties in Korea,” and Jo was finally won over.

“After talking to Park for 30 minutes, I could feel she was sincere in what she was saying,” recalled the 56-year-old ad man, explaining how he became the head of the party’s public relations and planning department. A year has passed and Park Geun-hye will be inaugurated as Korea’s first female president in February. Jo played a role in her rise as one of the architects of the party’s new color, red, and name: It used to be called the Grand National Party before renaming itself the Saenuri (meaning New Frontier) Party.

As he prepares to head back to his old job in Korea’s advertising industry, he told the JoongAng Ilbo during a recent interview that, while the Park campaign may have been a success, he has personally experienced many failures in his career. He lists his movie “Who Are You?” among his catalog of disasters as it failed to become a box-office hit, even though critics were more forgiving and said it was ahead of its time. Meanwhile, Shim Jae-myung, the president of Myung Films who worked with Jo on the film, described him as a “man with extraordinary talent.”

Q. You were in politics for about a year. What does it feel like to leave?

A. I’m happy. The year passed by very quickly and it was very intense. I looked in the mirror one morning and saw that the red dye on my hair had almost grown out, which is when I realized it was time to leave. [During a TV debate last year he pledged to dye his hair red if citizens supported the Saenuri Party’s candidate Park in the April general election.] My main profession, advertising, is about manipulating or moving people - either to sell a product, enforce a image, or generate some other result. But I think I’d rather do that in the advertising industry rather than in politics.

Many people assessed your career in politics as being a success. Do you have any tips?

My motto is that if I’m going to learn from someone, it should be someone who has lived a very different life from mine. I’m always thrilled and excited when I meet people with different beliefs or thoughts.

There is a street merchant who sells corn at the Hwayang Intersection [in Gwangjin District, eastern Seoul]. He always seems happy, so one day I asked him why. He said he has his own set of rules, such as, “never sell anything apart from corn” and “always take Sundays off.” I liked him, and how he is a man of principle. We became close and sometimes we drink soju together. I guess that’s how I was drawn to politics in the first place. I was thrilled at a new group of people: politicians.

You’ve had your ups and downs before entering politics. When was the hardest time?

Before joining the ruling party, I was teetering on the brink of a personal crisis. After working in advertising for quite a long time and becoming successful - some of my ideas were big hits - I became more ambitious and started some culture-related businesses, including an “English Village.” This was a new challenge, and it turned out to be a big failure. I lost all my money and even thought of committing suicide at one point. It was the darkest and cruelest moment of my life.

I wanted to return to advertising, but no one wanted me. They must have thought I was too old and I’d achieved too much. I was in my mid-50s then. I felt like I was an old tiger who had lost all his teeth, so to speak. Copywriting had always given me a lot of pleasure, but now this was becoming tinged with bitterness. It was around the time that I got the offer from the Saenuri Party. I wasn’t sure if there was anything I could do in politics, but part of me felt it could be an opportunity for yet another challenge.

Where do you get your inspiration as a copywriter?

In the ’90s, when I had been in the industry for only a few years, a female assistant came to work for me. She was from a good family and had a good educational background.

One day, she came in crying and said her father wanted her to quit. I told her to go tell him, “Being a copywriter is the best profession in the world. A copywriter can help all sorts of people, from beggars to presidents of countries.” That’s how proud I was of my profession.

I always carry two notepads around with me - a big orange one, and a small green one. I leave them beside my bed when I sleep, because if an idea comes up in my sleep and I wake up, I have to jot down immediately.

The big notepad is for me to write or draw my flow of thoughts. The small one is for brilliant catchphrases or slogans. Sometimes they come up when I talk with others or observe people.

What’s on the notepads may seem useless, but I have to say they became useful in the most surprising ways. Without them, there wouldn’t have been my ideas, and I wouldn’t have got where I am now.

You took a lot of flak for joining the ruling party. How did you handle it?

People around me have many different political inclinations, so some blamed me for joining the conservatives. But I didn’t care. I wasn’t in charge of politics, only PR. I told myself to just focus on what I was doing.


What did you do on the day of the presidential election?

I was so nervous that day - which turned out differently than I expected. I heard rumors in the morning that Park had a low chance of winning, and I think that made me more nervous. So I went to watch “Les Miserables” later that day. I turned my phone off and just watched the film. After it finished, I learned that Park was winning. Perhaps that was the moment I said goodbye to the Saenuri Party in my mind.

Some people can’t recognize me now that my red hair dye has gone. And that made me think that my strategy finally worked. My job at the Saenuri Party was to plant the color ‘red’ in people’s minds.

But even after leaving the political sphere, I still intend on stealing people’s hearts.