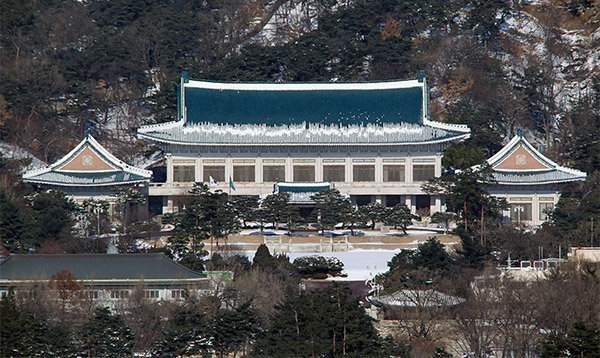 A former National Assembly speaker who worked on the presidential transition five years ago advised President-elect Park Geun-hye to move her office closer to her aides in the Blue House for better communication and efficiency.

Kim Hyong-o, former speaker of the National Assembly who served as deputy chairman of President Lee Myung-bak’s transition team five years ago, gave a special lecture to Park’s transition team Sunday. During the lecture, Kim talked about the problems of the current layout of the Blue House compound.

Built in 1991, the two-story main building of the Blue House houses the president’s office, the first lady’s office, a main conference room, offices of the personal secretaries to the presidential couple, a dining room and reception rooms.

The presidential chief of staff, senior secretaries and other staffers are using three buildings located about 500 meters (546 yards) away from the main building, which takes up to 10 minutes to walk. Secretaries often use cars to travel between the two areas.

Multiple layers of security need to be passed to enter the main building.

“The transition team should begin thinking about changing the current layout of the Blue House compound,” Kim said. “The buildings for the presidential aides are too cramped, so it would be best for their offices to be moved to a new place. But since that is unfeasible, it’s better for the president’s office to be moved to the secretariat’s compound.”

President Roh Moo-hyun outfitted a second presidential office in one of the three staffers’ buildings, built in the 1970s, but he rarely used it.

First built in 1991, the cost of the Blue House compound was more than 20 billion won ($18.8 million). At the time, the annual budget for the country was about 31 trillion won.

Modeled after a royal palace, the compound has a number of architectural problems. The main building, about 30 meters tall, is as high as a 10-story apartment building. But it has only two floors with very high ceilings.

The main office of the president is larger than 99 square meters, or 1,067.5 square feet. The distance from the door to the president’s desk is about 15 meters.

“This is a place that suits authoritarianism, not democracy,” Choi Jang-jip, honorary professor of Korea University, told the JoongAng Ilbo. “Even if a leader is elected democratically, it is impossible for him or her to become a democratic president in this environment.”

Architect Seung H-Sang said the Blue House’s special design makes a president more authoritarian in thinking and behavior. “Our presidents became miserable because they had to live in that building for five years,” he said.

The Blue House even became an issue during the last presidential campaign. Moon Jae-in, the defeated candidate of the Democratic United Party, said he would resolve the problem by moving the presidential office to the government complex in Gwanghwamun, central Seoul, to better communicate with civil servants and the public.

“The Blue House compound is an authoritarian place, where the presidential chief of staff needs to hop in a car to meet the president,” Moon, who served as President Roh Moo-hyun’s chief of staff, recalled. “Of the vast areas inside the compound, most spaces are for the president’s exclusive use, while only a small space is used by hundreds of staffers,” he said. “It was a bizarre place.”

During the campaign, Ahn Dae-hee, Park’s political reform chief, advised her to move the presidential office within the compound if she was elected so that she can work closer to her secretaries. Park said publicly that she accepted the recommendation.

In the past, presidents have had similar ideas but none managed to resolve the issue.

Kim Young-sam and Kim Dae-jung made promises to relocate the presidential offices during their presidential campaigns but couldn’t due to security reasons.

During their terms, President Roh and incumbent President Lee reviewed plans to renovate the Blue House but never followed through because of the cost.

The Blue House’s annual budget is about 160 billion won, and it is unlikely the legislature will increase it by more than 10 percent to redesign the presidential compound.

At the end of 2008, the Lee Blue House reviewed a plan to build a new building for the staffers and senior aides, since two of their three office buildings received bottom grades in a disaster risk assessment.

It was estimated to cost about 20 billion won and ultimately was scrapped.

Park’s transition team is expected to address the redesign of the Blue House layout because she has promised to streamline the organization of the presidential secretariat.

With the organizational overhaul, the offices of the staffers are expected to be changed.