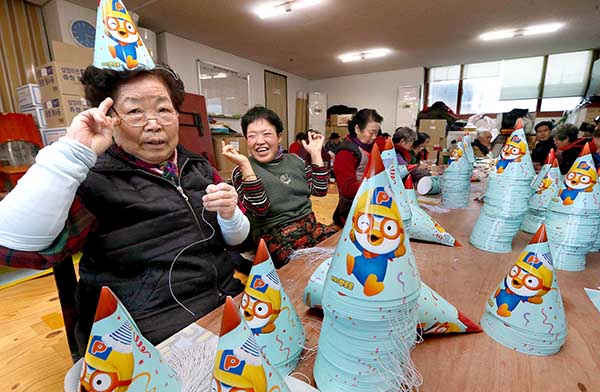 Kim Hyang-ja, a 71-year-old resident of Manseok in Incheon, poses while making party hats at the self-support working center. Over 300 residents of the low-income neighborhood have made charity donations of over 1 million won (940 dollar) for each of the past five years. Provided by Ahn Seong-sik

Manseok, a neighborhood by the docks of Incheon harbor, is known for its flophouses, which are inhabited by elderly people without families to support them. There are some 250 small and shabby dwellings, and the people living in them share six bathrooms. Many people suffer through the winters with no heating systems. Around 30 people of the poor, elderly residents receive the government’s basic living assistance payments.

But every December, the struggling residents of Incheon do something surprising. They band together to raise a year-end fund for charity. Last month was the fifth year of the charity drive, and roughly 300 people raised 1.13 million won ($1,063) for the Community Chest of Korea.

The charity drive began in 2008 when one resident proposed making a donation box. At the year’s end, 871,110 won was collected, surprising the whole neighborhood. In response, the Minister of Health and Welfare sent them two boxes of apples and a letter of gratitude.

Of the 300 residents who made donations this year, some 200 have participated in the annual event since 2008. Their donations vary from as little as 10 won to as much as 10,000 won, but they say each gets the same sense of satisfaction. “When I donate, I feel so fulfilled with a hope that my money would contribute [to society],” says Kim Jae-soon, an 85-year-old resident.

When the JoongAng Ilbo visited a state-run working center in Manseok Friday, two dozen people in their 70’s and 80’s were busy making party hats.

Kim Myung-gwang makes about 50,000 won a month working at the center. The 72-year-old Kim, who also collects paper, cardboard and empty bottles from the street to sell, said he usually has about 100,000 won to spend every month after living expenses and rent for his flophouse.

“I make money by tirelessly picking up waste paper on street,” said Kim. “I hope my little donation can help those who are in an even more challenging situation, especially those without parents.”

Kim Ju-hyeon, director of the Community Chest of Korea, expressed gratitude for the neighborhood’s generosity despite their own financial hardships.

“The donations of the past five years by the residents here have been possible thanks to their desire to help others in greater need.”