Getting to know Dang, new coach for Daegu

Getting to know Dang, new coach for Daegu 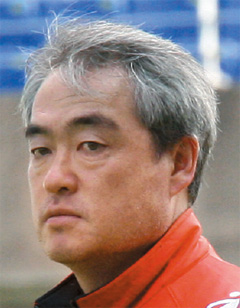 When Dang Seong-joung was named to replace Brazilian Moacir Pereira as head coach of Daegu FC in late November, many people scratched their head, saying, “Dang who?”

It was the first head coach job offered to Dang, 46, who had long been off the media’s radar as an assistant coach. Unlike many of the current head coaches of the country’s top football league, K-League Classic, Dang didn’t have an impressive career as a player on his resume. He only played one game in the league, as a substitute.

In the third of a series of Ilgan Sports interviews with new K-League coaches, a modest Dang said that he did not want to draw media attention by making a pledge that he would turn the largely average team into a powerhouse in his first season as a head coach. But, he said that he hopes to take advantage of his long career as a scout and an assistant coach, including with Daegu for the last season.

Q. I heard that you washed the feet of the players during your first team-building ceremony.

A. We are in the foot-using business. Washing the feet of the players was a chance for me to share with them our goals and build teamwork. If I have succeeded in getting my message across with it, I think they be willing to play a little bit harder on the ground. It might take time, but I think we need to coach the players in a way that earns their respect. Coercing them may bring an outcome for a short period, but it is very short-sighted.

Many people wonder what kind of a person you are. What was your career as a player?

I was a promising player when I was adolescent. I made it to the junior national team. But I was not wise at that time and I took my football ability for granted and was lazy in training. I had no sense of urgency in playing football. I finally became sensible, but then I suffered an injury. When I was practicing, I hurt my right ankle badly. My injury kept me from securing much playing time. That ate away at my pride and I said that I would quit. That was at the age of 29.

You have had a long career as a coach. How long was it?

I spent 16 years on the coaching staff in Ulsan and three years in Daegu.

What kind of a team do you want to turn Daegu into?

Daegu finished 15th in 2010, 12th in 2011 and 10th last year. I think we can do better than that. I want to do well and do it in style. But, I don’t want to make a fuss by saying which place we want to finish. Patience is my strength. Daegu will boil at a gradual pace. Please keep an eye on us.