Lee sweats it out to get called up to the Majors

Lee sweats it out to get called up to the Majors 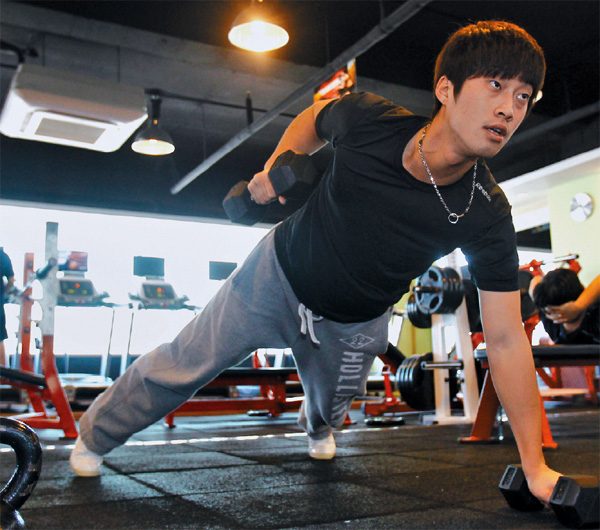 Lee Hak-ju, an infielder with the Montgomery Biscuits, a Double A affiliate of the Tampa Bay Rays, works out at a fitness center in Anyang, south of Seoul on Jan. 4. By Kim Min-kyu

‘Moving up to the Major Leagues, that’s my priority.’ - Lee Hak-juLee Hak-ju, an infielder with the Montgomery Biscuits, a Double A affiliate of the Tampa Bay Rays, has been a Major Leaguer in the making for five years. For the first time in years, the 22-year-old Korean is seeing his name mentioned frequently in the media.

In November, Lee made it on a 40-member roster for the Rays, his first time on any Major League team, brightening the prospects of his entry into the MLB for the upcoming season.

In an recent interview with Ilgan Sports in Anyang, south of Seoul, Lee expressed hope to join Choo Shin-soo of the Cincinnati Reds to “represent” Korea in the 2013 season.

Choo is currently the only Korean position player in the Major Leagues.

“My goal is constant. Moving up to the Major Leagues, that’s my priority,” Lee said in the interview held in a fitness center in Anyang where he has been working out since the 2012 season ended. “I won’t be complacent about making it on the 40-member roster. I believe a chance will come along if I don’t lose my resolve.

“The first three years were a really difficult adjustment. But, in the fourth year, I realized that there is something more important than adjusting. The real fight is against myself.”

Lee, who signed a minor team contract with the Chicago Cubs in 2008 right after graduating from Chungam High School in Seoul, battled for four years to prove himself.

His progress was slow and steady.

His batting average in the previous four seasons, including the time with the minor affiliates of the Cubs until January 2011, is 0.287.

“The team knows that I lack power,” Lee said. “If I go to spring camp, I won’t mind assuming the ninth position at bat and would make it my priority to get on base as much as I can. The next thing I want to do is get as many hits as I can and be faithful on defense.”

He said that he has imagined himself in the Major Leagues with Choo, 30, who recently moved from the Cleveland Indians. He said he sometimes talks with Choo to ask his advice.

“I am yet to catch up with him but I am continuously seeking to be like him,” he said. “I am asking Shin-soo about many things. He once mentioned Justin Verlander (the Detroit Tigers ace) as the most difficult pitcher to hit against.

“But he hit a homer against him when he faced him in his first at-bat in May of last year. I have no idea how he could do that. It’s amazing.”

He said the Rays’ star third baseman, Evan Longoria, 27, is his other role model and a mentor.

“He [Longoria] is the guy that makes me wonder how he could be so good,” Lee said. “He gave me advice during the spring camp that I could have a chance if I work hard. We practiced together and he told me many interesting stories.”

He said that he wants to make it to the Korean national team as much as the Major League and hopes to play during the Asian Games to be held in Incheon, west of Seoul, next year.