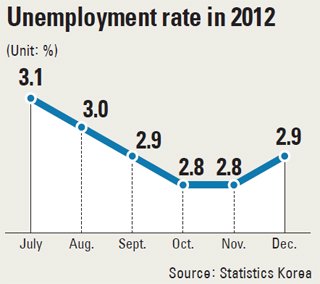 The jobless rate remained under 3 percent for the fourth straight month in December, but job growth sharply slowed down, suggesting that labor market conditions remain tough for many job seekers, a government report showed yesterday.

According to the report by Statistics Korea, the jobless rate stood at 2.9 percent last month, slightly up from the previous month’s 2.8 percent. The rate has been in the 2-percent range since September.

The number of jobs added to the economy, however, declined. About 277,000 were created last month compared with a year earlier, down from 353,000 jobs registered in November, the report showed. It is the slowest job gain since September 2011 when it grew 264,000.

The construction sector shed 82,000 jobs in December from a year earlier as cold weather conditions resulted in a decline in employment of daily and temporary workers. The publication, visual, broadcasting and communications service sector saw 43,000 jobs disappear over the same period.

Labor market conditions for young people remained tougher. The unemployment rate for those aged 15-29 jumped to 7.5 percent from the previous month’s 6.7 percent. This is the highest level since June when the rate rose to 7.7 percent.

“Jobless rates among younger people often rise in winter when students graduate and join others in looking for jobs,” an agency official said. “The seasonally adjusted jobless rate, which reflected such factors, remain unchanged at 7.3 percent in November.”

The job report comes as Korea’s economy faces heightened uncertainty stemming from worries that the protracted euro zone debt problems and global slowdown could dampen its growth by undercutting exports.

The government recently revised down its growth outlook for this year from 4 percent to 3 percent, citing tougher economic conditions at home and abroad. It says the outlook is a “baseline,” meaning that growth could slow further into the 2-percent range.