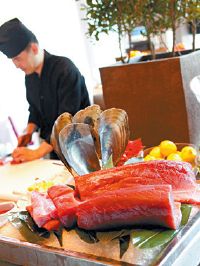 Jan. 22: Park Hyatt Seoul will host a celebration of “Masters of Food & Wine”, an event that brings together the world’s finest foods and wines at The Timber House.

The tuna-themed event will feature a short cooking class and a five-course dinner of tuna specialties paired with matching wines.

The hotel’s sushi chef will teach how to choose the best quality tuna, explain each part of the tuna, demonstrate cutting methods and offer some tips on how best to enjoy tuna.

Along with wine, there will be sake, soju, single malt whisky and unique signature cocktails.

The “Masters of Food & Wine” is limited to 30 guests and the tuna cooking class starting from 7 p.m. is limited to 15 guests with no additional charges for the class. Reservations are required.

Ongoing: Lobby lounge “Delmar” presents a handmade hamburger and sandwich menu that is directly made by the hotel chefs.

A total of seven items are available, including a bulgogi and mozzarella sandwich. Prices start at 25,000 won ($23.55) and include tax and service charge. 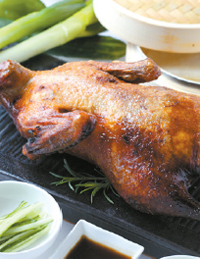 For example, Peking dishes to be served include Peking duck, stir-fried sea cucumber and leek, sweet and sour fish and stir-dried scallop and leek.

Tongyoung, located in southern Korea, is well known for its fresh and high-quality seafood.

Through February: Genji, the hotel’s Japanese restaurant, will hold a nabemono, or a Japanese-style one-pot meal, promotion where seafood, vegetables and noodles are cooked in a ceramic pot.

Nabemono specials to be featured at Genji include swellfish with vegetables and Korean-style spicy sea bream. Prices range from 69,000 won ($ 64.99) to 105,000 won, including tax and service charges.

Petza has gained a reputation for creativity and preserving traditional Sardinian cuisine. 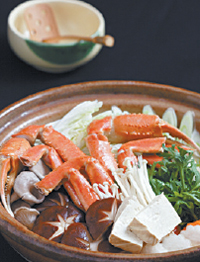 *Information is culled from the hotels.