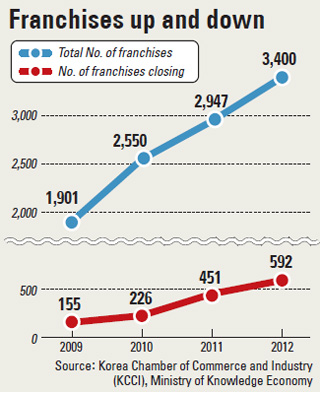 Despite growth in franchises opened by retired baby-boomers, the number of franchise stores shutting down also increased significantly.

The Fair Trade Commission said yesterday, the number of franchises that closed up shop and unregistered their businesses amounted to 592 last year, the highest since 2009.

Franchise chains must disclose their business information every year to the FTC.

“There are a few cases, where some franchisers accidentally miss reporting the number of newly registered franchisees or some franchisees skip renewing their registration as they have no plans to expand,” said a spokesman at FTC. “However, most of the unregistration seemed to come from the shutdown of businesses.”

“Franchise businesses are often attempted by retired baby-boomers,” said an industry source. “Since the baby boomers are retiring now, the number of new franchisees is overflowing while the number of those going out of business is also on the rise.”

According to a study conducted by the Ministry of Knowledge Economy and the Korea Chamber of Commerce and Industry at the end of last year, the average life span of a franchise outlet was 5.38 years.

“Intensifying competition among franchises with new brands and a consumption downturn made it difficult for franchisors to survive. The new franchisees must prepare thoroughly to avoid going out of business,” said an industry insider.