Orion is the first snack maker to achieve the feat after Samsung Electronics and Hyundai Motor Group, it added.

In achieving the sales milestone, it sold about five billion Choco Pies in China, one of its leading products there, which would be equivalent to each of China’s 1.3 billion people eating one every three months. 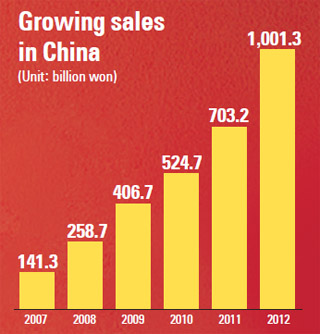 Other Korean food and confectionery manufacturers like CJ CheilJedang, Nongshim, Pulmuone and Lotte Confectionery also have production sites in China, but they haven’t reached the same sales target.

The company said its China unit grew by 48 percent on average in each of the last five years. Given that the Chinese confectionery market expanded by a mere 20 percent last year, Orion’s growth is considered “surprisingly good,” the company said. Last year alone, the company saw a 42 percent growth in sales. Its China sales are expected to outnumber sales at home in 2012, the snack maker said, although the figure for the local market is not yet available.

“The company has done so well in China that many consumers there think Orion is a Chinese company,” said Park Jong-kook, a spokesman for Orion Group in Seoul.

Orion Group Chairman Tam Chul-kon is an expert on the Chinese market, the company said. He insisted on a cash-based payment system with the company’s Chinese partners.

“It is a big challenge for a foreign company to make all transactions with local Chinese companies in cash, but Orion was able to manage it based on the chairman’s deep understanding of the Chinese people,” Park said.

The Korean company outstripped PepsiCo in terms of China sales in 2011 to rank as the second-biggest foreign player in China’s confectionery market, which is worth an estimated 12 trillion won. The market’s No. 1 foreign player is U.S. chewing-gum company Wrigley, with sales of 1.3 trillion won. Kraft Foods, best known as a maker of Oreo cookies, follows Orion with sales of 500 billion won. PepsiCo is estimated to have posted sales of 400 billion won in sales in the same year.

Orion’s sales network spreads over 2,000 mainland cities. It runs four factories in three major cities, Beijing, Shanghai and Guangzhou. A fifth will be built in Shenyang, in northern Liaoning Province, in 2014 as Orion aims to double sales in China.