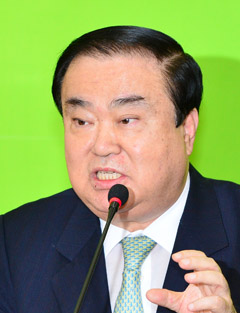 The Democratic United Party unanimously agreed to appoint a high-profile, moderate member as its interim leader to overhaul the largest opposition party after its defeat in last month’s presidential election.

Moon Hee-sang, 68, a senior advisor of the party, was named chairman of an emergency leadership. The party has been leaderless since its presidential candidate Moon Jae-in stopped leading it after the election.

“Abandoning all privileges, I will reform the party intensely,” Moon said at a press meeting yesterday. “The interim leadership will conduct a thorough and neutral evaluation of why we lost the presidential race.”

As an interim leader, he will appoint several other leaders and prepare for a chairmanship election. Moon said he will hold the election “as early as possible”. 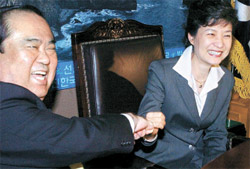 Moon, a five-term lawmaker from Uijeongbu, northeastern Seoul, was an anti-dictatorship student activist and a close aide to two former liberal presidents, Kim Dae-jung and Roh Moo-hyun. After graduating from the elite Seoul National University law department, Moon passed a civil servant test to become a high-ranking government official, but was rejected because of his role in the student movement.

He was appointed chairman of the Democratic United Youth’s Association in 1987, a private group of followers of Kim Dae-jung.

Within the DUP, Moon is known as a moderate who is able to get along with various factions, not just its inner circle of Roh loyalists.

Moon said yesterday he is not hostile to president-elect Park Geun-hye, daughter of former strongman Park Chung Hee. In 2002 he said he found her to be “a balanced, flawless politician with a great perspective in history” when he worked with her at the National Assembly’s unification committee.

In 2004 he said it’s “wrong to blame her for her father’s dictatorship.”

“There’s no change in my view of Ms. Park,” he said at the press meeting. “If she goes forward with a direction for the people and grand national unity, there’s no reason for us to oppose her.”

But he said Park’s appointments for her transition team didn’t please him.

“We still have a question as to whether her appointments were the right decision for grand national unity,” he said.