Jang sets down her weight belt

Jang sets down her weight belt 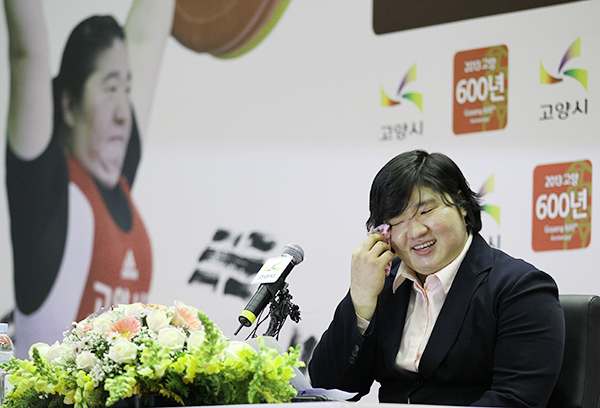 Jang Mi-ran, a 2008 Beijing Olympic gold medalist weightlifter, wipes away tears as she announces her retirement at the indoor gymnasium of Goyang City Hall in Gyeonggi yesterday. By Kim Min-kyu

Olympic gold medalist Jang Mi-ran yesterday put down her decorated athletic career for good during a teary media conference, and then revealed her next ambition.

The 29-year-old weightlifter said that she will try to become a member of the International Olympics Committee’s Athletes’ Commission, a position that another female sports star of the country, Kim Yu-na, is also seeking.

“It is not something that I can do just because I want to, but I will prepare myself diligently to be able to qualify for an IOC athletes’ [commission] member,” Jang said at the press conference held at the indoor gymnasium of the Goyang City Hall in the northern Gyeonggi city.

She said Moon Dae-sung, 36, the 2004 Athens Olympics Taekwondo gold medalist who has been an IOC athletes’ commission member since 2008, has inspired her to seek out an IOC membership.

She said that she thinks the membership could help implement charity projects by her own charity foundation named after her. She established the Jangmiran Foundation in February of 2012.

“An IOC member has a huge influence,” she said. “I think [with the membership] I would be able to have a positive influence on businesses with the [Jangmiran] foundation.

Kim, 22, the 2010 Vancouver gold medalist in figure skating, also said last July that she would aim for the IOC Athletes’ Commission membership after ending her career as an athlete at the 2014 Sochi Olympics.

Jang’s retirement has been predicted since even before she competed in the London Olympics to defend her title. She was suffering from injuries and was not considered a favorite to win the 75-kilogram (165-pound) and over category. She finished fourth at London.

“I had thought of retirement for three months after the national sports festival,” Jang said.

Two months after the London Olympics, Jang won the National Sports Festival, completing a sweep of the national title for 10 straight years.

“I had lingering feelings about extending my career,” Jang said. “?‘Will this be my end?’ I wondered. But, I made up my mind that I would open the second chapter in my life.”

Starting a career as a weightlifter in 1999, Jang won her first major international competition at the 2005 IWF World Weightlifting Championships in Doha, Qatar. She went on to win the 2006 event at Santo Domingo, Dominican Republic, the 2007 event in Chiang Mai, Thailand, and the 2009 event on her home turf in Goyang.

She enrolled in a doctoral course in sports education at Yongin University early last year. She said yesterday that she will devote more time to studying.