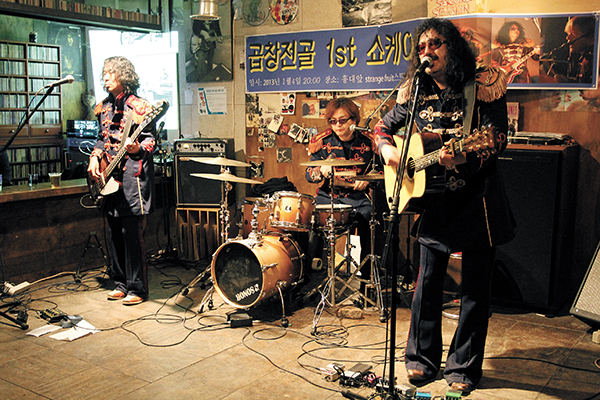 Gopchang-Jeongol, a Japanese rock band that is active in Korea, performs Jan. 4 at a rock club in Hongdae. Sato Yukie, right, is the leader of the band. Provided by Salad

Early this month, a small rock club, “Strangefruit,” in Hongdae, western Seoul, was filled with ear-rattling rock music. Although the band’s name “Gopchang-Jeongol,” which means “spicy pork intestine stew,” sounds very Korean, it consists of three Japanese artists. They were holding a concert to promote their third album, which is scheduled to be released in March.

The band debuted in Korea with its first album “Hello” in 1999. Aside from their first year, when the band was under contract with a Korean recording company, members never held a press conference or public concert because they couldn’t receive an art and performance visa (E-6).

Band leader Sato Yukie, 50, said he was “deeply touched” upon reading the words on the placard. For two hours, the band held its first ever concert in front of 40 people at this underground club. Although some in the audience thought they were just middle-aged men trying to fulfill their boyhood ambitions to be rock stars, they never gave up their love for Korean rock music. After their 1999 debut, it was 12 years until they released their second album “Let’s Dance Together.” Their upcoming third album will be titled “The Day Will Come.”

When the members’ six-month E-6 visas expired the first year of their debut, they couldn’t extend them. The so-called “entertainment visa” was difficult to obtain for foreign indie bands like Gopchang-Jeongol. Without it, they were banned from profiting through concerts. The band has been going back and forth between Korea and Japan with visitor’s visas.

According to Sato, it was 1995 when he first came to Korea and fell in love with Korean rock music after listening to Shin Jung-hyeon, Sanulrim and Deulgukhwa, among other musicians. Sato said he was “determined to study and pursue his career in Korean rock.” He taught himself hangul, and the band’s first album was remakes of old Korean rock music.

The band’s initial name was “Sato Yukie and Gopchang-Jeongol.” However, as it was before the Korean public was open to Japanese culture, the Korean government ordered the band to get rid of the Japanese name.

Since Gopchang-Jeongol had no visa, it has performed only for free.

The other two members live in Japan and are involved in other bands there. The band, as Sato put it, “has been earning money in Japan to afford to hold a free concert in Korea.”

Despite several occurrences that might have caused the band to reconsider its commitment to Korean rock, Sato says he never dreamed of leaving the country. He received permanent residency after marrying a Korean woman.

“Japanese youth are not interested in the old music of Japan. On the other hand, I was surprised to find out that young Koreans know who Shin Jung-hyeon is. That just goes to show that young Koreas care about old Korean music,” said Sato. “Korea is a country that has the power of music. And old Korean rock music harmonizes lyrics with sound. I feel like it includes the smell of garlic and kimchi in between every sound.”

Recently, Gopchang-Jeongolsinged negotiated an exclusive contract with Salad, a theater company for multicultural artists. The theater company has actors and singers from North Korea, Mongolia, the Philippines and other countries. The band also received the E-6 visas thanks to the culture minister’s recommendation.

Most of the songs on Gopchang-Jeongol’s second album were written by Sato. He wrote the lyrics in Korean as well.

“It was like writing a graduation thesis on Korean language and music,” said Sato and added that he is planning to include anti-war and peace messages in the band’s third album.

“Taking Gopchang-Jeongol as an example, I hope the Korean government will ease the process of granting E-6 visas to foreign artists so they can come to Korea and perform more easily,” said Sato.

On March 1, the band will hold a concert to celebrate the release of their third album at the Live Hall of SangsangMadang in Hongdae, western Seoul.