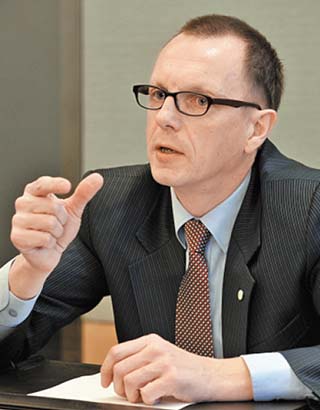 Bayer MaterialScience (BMS), a subgroup of German drug and chemicals maker Bayer Group, opened its Polymer Development Center in Korea yesterday in a bid to forge closer ties with its Korean customers as they emerge as leading global players in the IT and automotive sectors.

“The Korean market itself is important for us, but what is even more important is Korean companies,” said Michael Koenig, executive committee member of BMS and head of its polycarbonate business unit, in an interview with the Korea JoongAng Daily.

“Korean IT and automotive companies really have global leverage now, compared to 2005, as they have almost doubled their global market shares in recent years.”

“It is very important for us to have good contacts with them, to participate in their decision and design processes so that they know what to do with our materials,” he added. 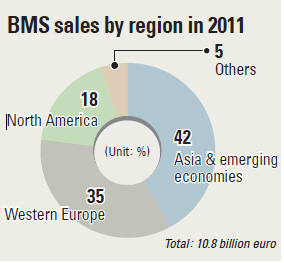 At the tech center in Yongin, Gyeonggi, BMS will demonstrate its products and provide technical knowledge for its local customers. Small tests for the development of new applications will also be carried out here.

Bayer, which famously makes aspirin tablets, is keen to promote itself as the world’s largest polycarbonate supplier, especially in Asia where demand for the material is rapidly growing. It is the world’s No. 1 polycarbonate producer with an annual production capacity of four million tons and 25 percent market share.

Proximity to the local market was the foremost reason for the company to open a new R&D center here, it said.

“Big Korean companies like Samsung, Hyundai and LG sell all over the world, but most of their developments are actually being done in Korea,” said Koenig. “With our new tech center, we can be closer to them, better engage in long-term R&D partnerships, and fulfill their needs with greater efficiency and speed.”

“The three key areas for BMS are the IT, automotive and construction industries, and Korean companies are really good at IT and automotive, having emerged as big global players,” he said. “We need to do our business where they are making their decisions and developments.”

“If we want to participate at the stage where they develop and design their products, we have to have more technical capabilities in Korea than we have now.”

For the same reason, BMS moved its polycarbonate division from Leverkusen, Germany, to Shanghai in 2011 to focus on growing demand in the Asia-Pacific region, which accounts for 60 percent of total global demand for the material.

By completing another tech center in Korea, BMS will have established a strengthened R&D network in Asia with three centers in the region. The Shanghai facility serves as a pure R&D center and a regional hub, while smaller tech centers in Korea and Japan will focus on understanding the needs of local customers and forging partnerships with them.

BMS has seen sales grow rapidly in the Asia-Pacific region after a slight decline in 2009. It recorded 2.8 billion euros ($3.5 billion) in sales in 2011, up from 1.9 billion euros two years earlier.

The company has also decided to ramp up investments in R&D, staff and facilities in the region. It spent 2.1 billion euros in 2012 and intends to invest a further 1 billion euros this year.

Koenig expects global demand for the material to grow 5 or 6 percent in 2013 as he maintains an optimistic outlook on the prospects of a global economic recovery.

“Even though we don’t see a brilliant year ahead, it will be reasonably good as worries about the euro zone breaking up are fading away,” he said. “I hope we see some stability compared to last year.”

“Domestic consumption will increase, particularly in China, for cars and IT products that use polycarbonate,” he added.

Polycarbonates, which are transparent, resilient and resistant to heat, were discovered by a chemist at Bayer in 1953 and first commercialized in 1958. They are used in making a wide range of products including smartphones, wireless devices, medical equipment and automobile parts. The material is much touted for being lighter than metal and glass, almost unbreakable and highly flexible. It can be colored and molded easily.

“The quality of a car can be measured in terms of its polycarbonate content,” Koenig said. “The better the car is, the more polycarbonates you find.” They are also more expensive, he added.

Car manufacturers are increasingly turning to the material for automobile parts as they can make cars more stable, less noisy and more immune to scratches, Koenig explained.

“As the Korean automotive industry is taking off, our business here is going to be larger as [local automakers develop] this small but sophisticated niche for their cars,” he said.

BMS was able to compensate for its losses stemming from weaker demand in Europe courtesy of growth in Asia’s luxury sedan market last year, he said.