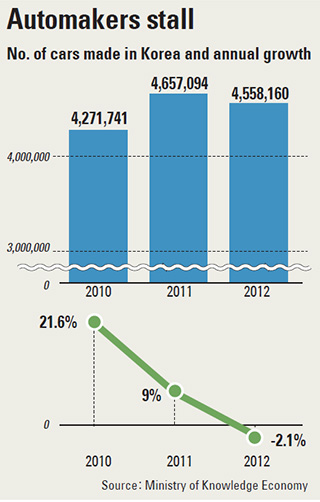 Korea produced 2.1 percent fewer cars last year than in 2011, the first drop in three years, according to the Ministry of Knowledge Economy.

The fall resulted from sluggish domestic demand and unstable relations between labor unions and management at local carmakers, it said.

“Different from 2011, when salary negotiations were settled without conflicts arising, the prolonged settlement last year caused partial strikes which resulted in manufacturing delays, especially in the third quarter,” the ministry said in a release.

The number of local cars sold in Korea also fell by 2.4 percent last year to rest at 1.51 million units.

“Shrinking consumer confidence due to high oil prices and rising household debt amid a tepid domestic economy pushed car sales down for the first time in four years,” the ministry said.

The ministry also blamed local carmakers for the declining sales as they didn’t introduce many new models in 2012.

Imported carmakers took advantage of this lack of newfound diversity and sold a record number of cars last year, or 130,858 units, up 24.6 percent on-year.

Shipments to Europe fell 6.4 percent due to the drawn-out euro zone fiscal crisis, while exports to the U.S. jumped 18.4 percent to 631,000 units.