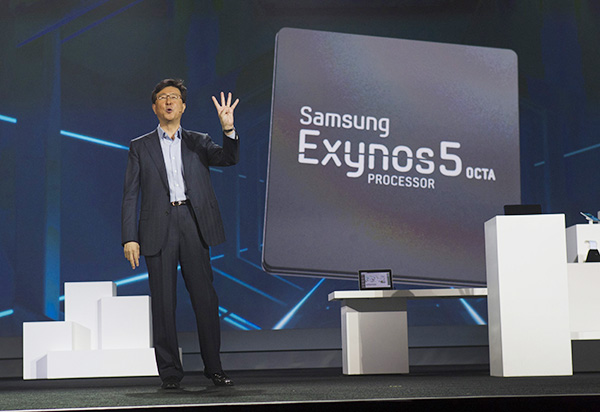 LAS VEGAS - Samsung Electronics introduced an eight-core processor called Exynos 5 Octa at the Consumer Electronics Show (CES) on Wednesday that will likely be used in high-end smartphones and tablet PCs.

Stephen Woo, president of system LSI business under the device solutions division at Samsung Electronics, presented the processor as the latest upgrade to its Exynos 5 lineup and a follow-up to the Exynos 5 Dual, currently used on Google’s Chromebook and Nexus 10.

The Exynos 5 Octa is based on British semiconductor designer ARM’s big.LITTLE architecture.

“When you want multiple applications to perform at their best, you want the best application processor available - the Exynos 5 Octa,” Woo said during a keynote speech. 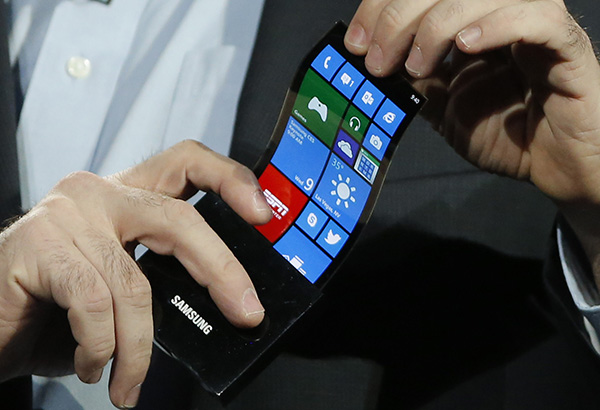 It uses two sets of four cores to divvy up workloads. This is double the number of chipsets in Samsung’s Galaxy Note 2 phablet and S3 smartphone. The new processor uses a low-power, high-performance strip of silicon, Woo added.

The Exynos 5 Octa is expected to be embedded in the eagerly anticipated Galaxy S4, which is unlikely to be released before the middle of this year as a Samsung spokesman said the company is in no rush to roll out the new smartphone given the enduring popularity of its larger Galaxy Note 2.

In lay terms, the new processor would make the S4 twice as intelligent as the S3, or at least equipped with twice as much brain power.

Woo also showcased for the first time screens for smartphones and tablets that can bend and fold to make the devices more resilient. These were presented on several concept devices. The flexible screens, which Samsung calls Youm, are designed to provide quality as rich and crisp as those used on the latest smartphones, but offer more choices in terms of form or design, he said.

Woo, who holds a doctorate in computer engineering, highlighted the role of components as the engine behind innovation across the mobile ecosystem. “We believe the right component DNA drives the discovery of what’s possible,” he said. “Components are building blocks - the foundations on which devices are built. We at Samsung’s component solutions are creating new, game-changing components across all aspects of devices.”

His presentation in front of around 2,800 people also featured conversations with executives from Samsung’s business partners and was accompanied by a chain of videos and performances. Guests included ARM CEO Warren East, Microsoft CEO Eric Rudder and former U.S. President Bill Clinton.

Clinton, an active philanthropist, appeared near the end of the event. He said in a 20-minute speech that making communication and processing technology available to more of the world can help bridge gaps between rich and poor countries.

This is the third time a Samsung executive has delivered a keynote speech at the 45-year-old tech fair, which switched to annual format in 1998.

Chin Dae-je, former CEO of the electronics maker’s digital media division, was the first in 2002, followed by BK Yoon, president of its consumer electronics division, in 2011.

Yoon said at a press conference here later on Wednesday that from this year, major electronics producers will accelerate their moves to discover new paradigms and overhaul business structures amid fierce competition. He also predicted five more years of hard times for the global economy.

“The key theme for pending changes in the electronics industry from this year will be rebalancing,” he said.

He said Samsung expects its future competitors will probably emerge from a field like mobile industry rather than manufacturing.

“The essence of future competitiveness will lie in creating a new lifestyle,” he said, “which will be made possible by getting away from existing methods such as work, play, competition and communication, and by establishing new value.”