Postpartum clinics not up to snuff

Postpartum clinics not up to snuff 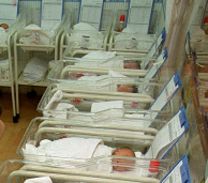 A 30-year-old parent, surnamed Jeong, who was receiving postpartum care at a clinic in December of last year, was shocked to see what was happening in a hallway leading to an infant unit.

A furry pet dog was running down the hall with no one watching. More upsetting was that the dog was brought by friends of a nurse to the care center.

“No one was at the site to watch over the pet,” recalled the mother. Jeong said she thought it “made no sense” that the postpartum clinics, which should have the utmost sanitary conditions for newborn babies, let a dog wander freely right next to the infant unit.

When she demanded an apology, the clinic supervisor only offered a refund and even implied Jeong was making a big fuss out of a trivial matter.

“I had to take a 7-day-old baby to another clinic during the height of winter last month.”

Another mother of a 2-year-old daughter, surnamed Lee, said her daughter has a three-centimeter (1.18-inch) scar on her face, which she got from a postpartum clinic in Dongdaemun District, central Seoul, in 2010.

“A nurse’s fingernail scratched her face while bathing her,” said the mother, who paid for a number of facial treatments in efforts to remove the scar.

The mother said the clinic responsible for the scar did not provide compensation for the medical charges because there is no law dealing with the matter.

Reflecting on the growing dissatisfaction with the service provided by postpartum clinics in the country, the number of complaints reported to the Korea Consumer Agency has gradually risen, reaching 867 last year from 501 in 2010. The rise in complaints is coupled with an increased number of post-labor care centers, which rose to 510 last year from 294 in 2006 nationwide.

In response to increased demand for enforced state regulation and proper care provided by postpartum centers, the Ministry of Health and Welfare yesterday unveiled a set of plans to reinforce state control on the 510 clinics.

One of the introduced measures is to require clinic owners to be instructed on infection and sanitary control, a change from the previous rule that allowed clinic workers to attend an instruction class on behalf of clinic owners.

“Of the 510 clinics in the country, 55.5 percent of those running the care centers are not medical personnel but rather business managers with no medical knowledge,” said Ha Jin, deputy director at the fertility policies office at the Health Ministry.

“With a new regulation measure that requires clinic owners to undergo instruction, we expect increased awareness among the business owners of the importance in maintaining higher sanitary standards at clinics.”

The government also made it mandatory to examine clinic employees for five additional diseases, including hepatitis B, rubella and measles, to prevent infection.

The ministry also said it would present a new guideline for solving conflicts between clients and managers to ensure consumers’ rights are protected.