SMBA says new gov’t should give it an upgrade

SMBA says new gov’t should give it an upgrade 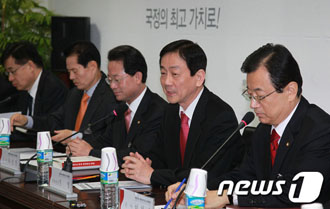 The Small and Medium Business Administration (SMBA) made a proposal to the transition team for the next government yesterday to upgrade its status.

The proposal is aimed at providing more support for small enterprises.

The SMBA was the first economy-related government agency to report its current affairs to the transition team yesterday.

The SMBA’s proposal was included in a 180-page report containing suggestions for the incoming government of President-elect Park Geun-hye when it devises policies for small businesses.

The SMBA said the foremost task was to upgrade its own status to help smaller companies in an economic structure that favors large companies.

Currently, the SMBA is under the Ministry of Knowledge Economy. It wants to be a committee under the Prime Minister’s Office. It also wants a presidential aide overseeing policies for small businesses.

The body also requested more support from the next government to expand issuances of Onuri gift cards to revitalize outdoor markets and subsidies for research and development by small enterprises. Increased government support for small companies to trade with North Korea as part of economic cooperation between the two Koreas was suggested, too.

The SMBA called for more discussion with the financial authority to help small exporters that were hit by losses because of a foreign exchange-related derivative.

It also asked for the setting up of an entity that will carry out measures to pursue so-called economic democratization, which is often used as a code to weaken the power of large companies over small.

“As President-elect Park said she wants to become a president for small businesses, we have high hopes and expectations for the new president,” an official at the administration said.