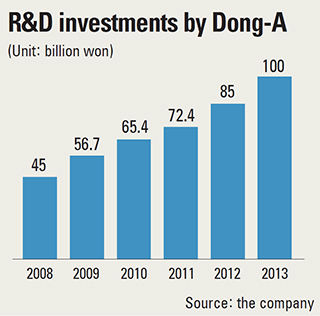 Top local drug maker Dong-A Pharmaceutical decided to make a 100 billion won ($95 million) investment in research and development this year, up 18 percent from last year, in a bid to accelerate development of new original drugs and increase exports.

“Although challenges lie ahead at home and abroad, Dong-A will keep expanding R&D investments to raise its competitiveness in the global market,” said Kim Won-bae, the company’s chairman.

The foremost goal will be developing new drugs that are customized for various nationalities around the world. Development will be done not only in Korea but also in the United States, China, India and Japan, the company said.

Dong-A will embark on the first project with its Japanese partner Meiji Seika Pharma to develop a so-called biosimilar for breast cancer treatments this year.

Korean drug makers are spurring efforts to go global and develop their own drugs in order to compensate for losses in the local market due to the government’s forced price cuts on a range of products.

Because of those efforts, stocks of drug makers are rallying on the local stock market. Market analysts think pharmaceutical stocks will continue to do well this year as the companies dedicate themselves to overseas markets. Last year, drug makers’ stocks fell by an average of 20 percent during the second half due to the government price cuts.

Dong-A’s stock rose by around 13 percent during the first two weeks of January compared to late last year. It closed at 124,000 won yesterday.

LG Life Sciences saw an over 23 percent rise in its stock price as of yesterday, ending at 55,800 won. Hanmi Pharmaceutical’s also jumped 13 percent.

While the overall Kospi rose by about 0.5 percent over the past 11 days, pharmaceutical stocks increased by 7.6 percent on average.

“Local drug companies tried hard to cut costs since last year, and their efforts are expected to pay off in the first half of this year,” said Ha Tae-ki, an analyst at SK Securities.

LG Life Sciences signed a contract with Sanofi-Aventis to sell its diabetes drugs in 80 countries in December. Sanofi-Aventis Korea is the second largest provider of diabetes treatments in the world, selling around 6 trillion won worth of them.

“Since there is a chance the two companies will sign bigger contracts later on, LG Life Sciences’ stock value is continuing to soar,” said Jeong Bo-ra, an analyst at KDB Daewoo Securities.

However some analysts are dubious.

“There have been some groundless expectations on success of local drug companies in overseas markets,” said Bae Ki-dal, an analyst at Shinhan Financial Group.