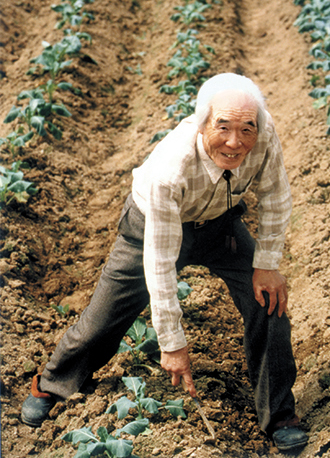 After being inspired by a book, Won Kyung-sun became the nation’s first organic farmer in 1976. [JoongAng Ilbo]

Won Kyung-sun, Korea’s “father of organic farming,” died on Tuesday. He was 100.

Won was a lifelong farmer, having entered the industry at the age of 16 after losing his father. He is known for pioneering organic farming techniques that do not rely on pesticides or chemical fertilizers.

Won was originally from South Pyongan Province, where he was born in 1914, making him 100 this year based on the Korean system for counting age. He began farming in earnest after the Korean War ended in 1953. At that time, he started a 10,000-pyeong (eight-acre) farm in Bucheon, Gyeonggi.

The land became the Pulmuone Farm, a home for war victims and homeless people. The farm was open to everyone who wanted to work there and make a living.

“Poor and unemployed people can become useful workers if they do farming,” Won used to say.

At 60, he came to a turning point in his farming life after reading the book “Farmer’s Way” by Junichi Kodani. He was impressed by a line that said proper farming techniques involve loving life. He said it gave him inspiration to start organic farming.

So in 1976, Won moved his farm to Yangju, Gyeonggi, and established the first association of organic farmers in the country. The motto of the group was to “love neighbors and respect life.”

Initially, it wasn’t easy to do farming without pesticides or other chemicals because weeds and insects invaded the crops. Won made natural fertilizers to support his crops, but yields declined compared to when he used chemical fertilizers.

Despite initial failures, though, he maintained a firm belief in preserving the soil for living things and the earth for all. After three years of hard work, the soil on his farm became fertile and crop yields began to increase.

In addition to working on the farm, Won also emphasized the importance of education and often visited local students to teach them about organic farming techniques. He served as chairman of the board for Geochang High School in South Gyeongsang from 1961 through 2006, and several programs he launched helped to teach students about the benefits of going organic.

Won was also quite the social humanitarian. In 1989, he established Korea Food for the Hungry International. As part of this organization, he visited Africa and provided food to hungry children. At a celebration for the group’s 20th anniversary, Won showed no signs of slowing down. He called for additional aid, saying that there are one billion starving children around the world and that a child dies of hunger every two seconds.

“My father had always taught us to walk with God and share things with others,” said Won’s eldest son Hye-young, who is a Democratic United Party lawmaker.

“He told us to write an agreement that we donate 25 percent of our incomes because 25 percent of the world’s population is suffering hunger,” the son explained.

Won often shared meals and housing with disadvantaged neighbors as a way to teach his family about the importance of supporting the community, his son recalled.

“My father ate organic meals for 40 years and always loved others,” the lawmaker said. “He was a strong man with love, which allowed him to live for a century.”

The late Won worked on his farm, now located in Goesan, North Chungcheong, until three years ago. He also left his family with a major commercial success as the founder of Pulmuone, one of the nation’s top food manufacturers. It has operated since 1981.

For his work, Won received the Greenman Award in 1992, the United Nations Global 500 Award in 1995 and the Order of Civil Merit Dongbaekjang in 1997.

Pulmuone will build a memorial hall honoring its founder at the company’s staff training center in Goesan.