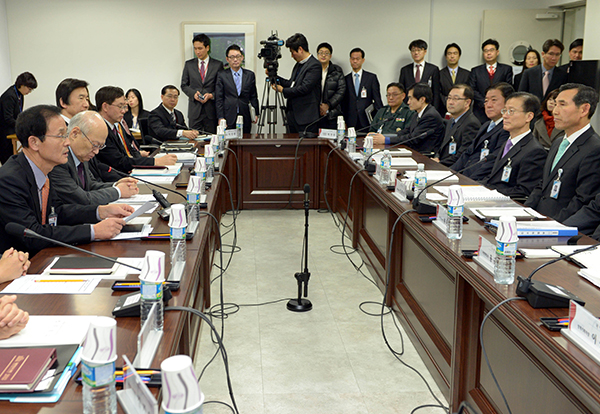 Defense Ministry officials give briefings on policy issues yesterday to the presidential transition committee at the Korea Banking Institute where the transition team’s office is located. [YONHAP]


Despite disgruntlement by the Ministry of National Defense, President-elect Park Geun-hye’s transition team is committed to her pledge to cut mandatory military service by three months, sources told the JoongAng Ilbo yesterday.

The presidential transition committee yesterday received briefings from the ministry on various issues including the upcoming wartime operational control handover from the United States to Korea. One of the key topics was Park’s promise to cut conscription from the current 21 months for the Army to 18 months.

The ministry was skeptical about the plan, but the transition team was adamant.

“Taking into account the current tensions between the two Koreas, shortening the military service period is expected to create a vacuum in operational capabilities,” a senior ministry official said. “We informed the transition committee that it should be handled as a long-term project because it requires hiring about 30,000 additional noncommissioned officers.” 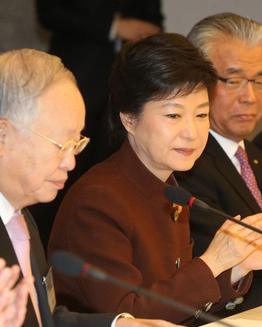 He, however, didn’t elaborate on other specifics, citing security reasons.

On Tuesday, the Ministry of National Defense said hiring 27,000 noncommissioned officers at the expense of 1 trillion won ($948 million) a year would be required to follow through with Park’s pledge. It cited a report conducted by the Korea Institute for Defense Analyses.

After further review, the ministry decided to call it a long-term project, rather than recommending the incoming administration give it up altogether.

On the eve of the presidential election, Park promised to cut the mandatory military service period. The pledge was announced during her last campaign event at Gwanghwamun Plaza on Dec. 18, hours before voters headed to the polls the next day.

Park’s adviser on defense policy said the promise is feasible.

“About 60 percent of the U.S. military is officers, but we have only about 20 percent,” said Kim Jang-soo, a former defense minister who heads the transition team’s foreign, security and unification subcommittee. “We should cut the service period of the soldiers by increasing the number of officers.”

He also said by spending 50 billion won to 100 billion won annually, the military can hire about 200 to 400 noncommissioned officers.

In addition to shortening the military service, 10 other topics were discussed by the ministry yesterday. Expensive projects such as plans to upgrade the aging fighter jets and to build an Aegis-class destroyer were discussed.

The transition committee also said current defense policy was focused too much on preparations to counter North Korea’s provocations.

The ministry also briefed the committee about its plan to establish a new joint combat command between Korea and the U.S. to replace the Korea-U.S. Combined Forces Command after Korea takes over wartime operational control.

In 2007, during the Roh Moo-hyun administration, Seoul and Washington agreed that Korea would take over wartime operational control of forces in Korea by April 2012. The timeline, however, was renegotiated in the Lee Myung-bak administration and the transfer is now scheduled to take place on Dec. 1, 2015.

Yesterday marked the first day of a one-week briefing period and the Small and Medium Business Administration, Ministry of Health and Welfare and other government offices also reported to the transition team.

President-elect Park did not attend any of the briefings yesterday.