Taxi companies profit, drivers left out in the cold

Taxi companies profit, drivers left out in the cold 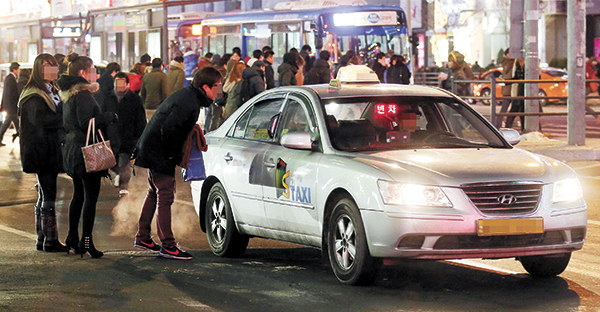 A taxi driver refuses to take passengers even though the taxi isn’t occupied near Gangnam Boulevard on Monday evening. A dozen officials from the Seoul Metropolitan Government were mobilized to prevent drivers from refusing to take passengers at night time. By Kim Seong-ryong

The Seoul Metropolitan Government recently cracked down on a man who owns 14 taxi companies with 1,400 taxis in Seoul.

In cooperation with the Special Judicial Police Force for months, they raided the offices of the man’s 14 taxi companies and found many violations, including fake account books.

They found that about 140 taxis from five of the owners’ 14 taxi companies have been illegally operated by drivers who were hired with subcontracts instead of as regular drivers.

The subcontracted drivers received lower wages than regular drivers and no insurance benefits. 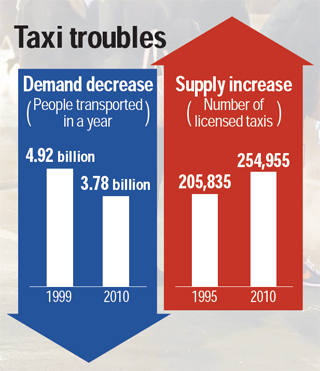 It is illegal for a taxi company to allow a person who isn’t hired as a regular driver to operate a taxi.?

For instance, a taxi company will report to a local government that it has hired 100 drivers, but it actually has hired only 50 drivers as regular workers who receive full benefits and 50 other subcontractors.

Those illegal drivers receive a taxi cab from the company, but they have to spend their own money for gas and maintenance.

They also make fake account books. One type inflates the number of regular drivers to submit to a local government and another reduces a company’s revenues from its actual amount to submit to the tax office.

The municipal government and the police judged that the owner ran the company this way to evade taxes and receive more government subsidies, including gas subsidies.?

It generated concerns as it has to provide an additional 1.9 trillion won ($1.78 billion) in funding for the industry. Many considered it unreasonable to include taxis as public transportation as no country in the world has a similar designation.

There are also concerns that the taxi law will only help taxi companies rather than individual drivers.

“If the law gets implemented, taxi companies might try to receive larger subsidies by illegal means, like hiring more subcontracted drivers,” an official of the Seoul Metropolitan Government said.?

The Ministry of Land, Transport and Maritime Affairs said there are about 22,000 taxis owned by companies in Seoul, and about 5,000, or 23 percent, of them are operated by subcontracted drivers.

It estimated that tens of thousands of such illegal taxis are operating nationwide.

Benefits including wages and insurance for drivers in taxi companies also need to be improved.

According to taxi drivers’ health insurance documents that were exclusively obtained by the JoongAng Ilbo, the National Health Insurance Service notified 1,432 taxi companies nationwide to pay 5.3 billion won in drivers’ insurance fees additionally for 2009 and 2010 in October last year.

It said that those companies intentionally misreported drivers’ wages as lower than the actual amount so they would pay a smaller amount in insurance fees.

The taxi companies strongly complained about the decision, but the National Health Insurance Service still ordered them to pay a fee if the reported taxi drivers’ wages were lower than the regional average.

“Some companies reported that they paid more than 2 million won a month to a driver while others said they paid 250,000 won,” Jeon Doo-hyeon, an official from the National Health Insurance Service said.

“We couldn’t believe any of those reports.”

Some criticized the taxi law even in their own industry.

“A taxi is a high-class transportation service,” said Park Cheol-young, executive official at Iljin Transportation in Dobong District, northern Seoul. “Providing a better service to passengers is our first priority if we want to earn more money. It is unreasonable to demand support by taxpayers’ money.”?

There are reasons that those subcontracted drivers never disappear. Companies can save more money that they need to spend for regular drivers including wages and insurance fees.

Drivers do not have to go through a background check including criminal history checks and they can work like private taxis if they pay a certain amount of money to a company every day.

According to the taxi industry, most taxi companies in the country demand taxi drivers, both regular and subcontracted drivers, pay a certain amount of their earnings every day. The average price in Seoul is about 105,000 won.

“With subcontractors, they [a taxi company] make more than 2.5 million won in revenue per taxi per month,” a source in the taxi industry said.

He was previously convicted four times, including for rape, but there was no law to prevent him from driving a taxi as he was a subcontracted driver.

Under the law, a person previously convicted for violent crimes including murder or rape as well as drug abuse can’t be a taxi driver for 20 years after being released.

Local governments aggressively have been trying to crack down on such illegal operations, but only a few companies were punished in court as they had trouble securing the necessary evidence such as fake account books.

The Seoul city government found 276 taxis in 19 companies are operating illegally in 2008, but only 20 taxis from one company were ordered to suspend its business due to lack of evidence.