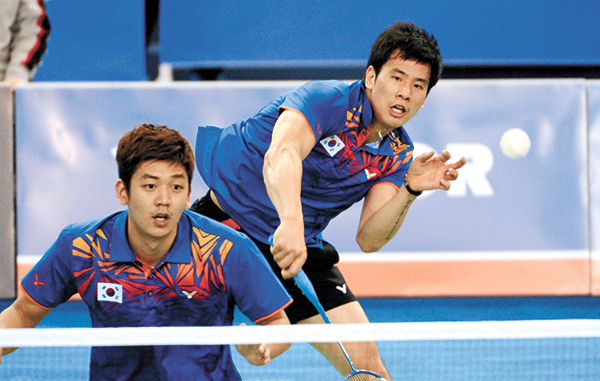 Lee Yong-dae, front, and Ko Sung-hyun in action against Mathias Boe and Carsten Mogensen of Denmark during the men’s doubles final at the Korea Open yesterday. [NEWSIS]

Korean badminton star Lee Yong-dae was confident about reclaiming the world’s top ranking after he and partner Ko Sung-hyun beat the current No. 1 pair from Denmark on their home turf.

“Sung-hyun has not held the world No. 1 ranking once,” said Lee, referring to his partner since the 2012 London Olympics. “I want to take the No. 1 position (with him). And I want to win the world championship (with him) as well.”

Lee, 24, who won a gold medal in mixed doubles at the 2008 Beijing Olympics, reached No. 1 with Jung Jae-sung. Lee and Jung parted ways after their bronze medal performance at the London Games.

Lee’s transition to his new partner has been smooth: He and Ko, 25, have won doubles titles at four consecutive international events, three of them in the past three weeks.

Yesterday’s victory was especially sweet for Lee and Ko, who lost to Boe and Mogensen in the China Open last November.

The Danish team also beat Lee and Jung in the semifinals at the London Olympics.

“We were under a lot of pressure because I had never beaten Boe and Mogensen in seven matches,” said Ko. “If we complement our defense a bit, we will be able to do better from now on.”

She was the first Korean champion in women’s singles at the Korea Open since Jun Jae-youn won in 2005.

Sung, 21, whose world ranking was No. 7, improved her record against Wang to two victories against three losses.

The Korea Open is the world’s richest badminton tournament, with $1 million in total prize money this year. It is one of five Super Series Premier events run by the Badminton World Federation. The others are the Indonesia Open, Denmark Open, All England Open and China Open.

At last year’s Korea Open, the host country failed to win any title, while China triumphed in four of the five events.

Wang and Yu, the No. 1 seed, broke a 17-17 first-set deadlock with four straight points. They were in full control in the second set, charging out to an 11-3 lead en route to their second Korea Open title in three years.

Along with two Korean pairs and an Indonesian team, Wang and Yu were disqualified at the London Olympics last year for attempting to purposely lose round-robin matches to set up a favorable draw in the knockout stage.

Cleared by the Chinese authorities to compete right away, Yu and Wang have captured three of the four tournaments since the Olympics.