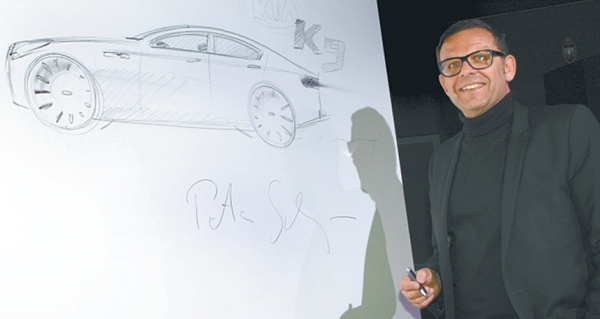 A veteran of Volkswagen and Audi, chief design officer Peter Schreyer has helped Kia get noticed, especially the popular K-Series. In his new position, he will also guide Hyundai’s visual identity. Provided by the company

The conglomerate that includes Hyundai Motor and Kia Motors said Schreyer’s new title will be chief design officer of Hyundai-Kia in a move to reinforce each brand’s identity and create synergy between two.

“Schreyer has abundant experience in design with other carmakers and knows the corporate culture of Hyundai and Kia,” the group said in statement. “He will play a big role in building a foundation for Hyundai and Kia to step up as the world’s top automakers.”

The 59-year-old German became the Korean automotive group’s first foreign president following the year-end reshuffle last month. He worked for Volkswagen and Audi before joining the company in 2006 and has been credited with upgrading the design of Kia models, especially its popular K-Series (K3, K5, K7 and K9).

His new task will be to develop long-term design visions for both automobile lines.

“Schreyer will beef up the brand identity and check the differentiation of design between Hyundai and Kia models,” the company said. “He also will foster talented designers and pass his know-how and experience on to them.”

Hyundai Motor Group said design competitiveness has played an important role in its growth in the global market.

Hyundai and Kia sold a combined total of 7.12 million vehicles worldwide last year, up 8 percent from 2011.

In 2009, Hyundai announced a design philosophy of “fluidic sculpture,” an elegant composition of flow and dynamic finishing. The company has applied the concept to an assortment of models, including the popular mid-size Sonata and compact Avante, known overseas as the Elantra.

Under Shreyer, Kia has followed a design philosophy known as the “simplicity of straight lines.” Its K-Series, Pride and Sportage R models have won Red Dot and iF awards, among others, for design.

Hyundai Motor Group Chairman Chung Mong-koo emphasized in his New Year’s speech that the company will focus on internal stability and product quality.

“As Hyundai and Kia have established annual production of 7.41 million units worldwide, it’s time set unique brand colors for each company in order to boost growth in quality,” the company said.