16 perspectives on stars at Globes

16 perspectives on stars at Globes 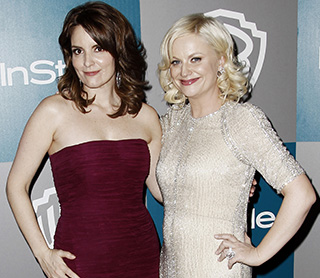 BEVERLY HILLS, Calif. -It’s a few days before the Golden Globes, and the Beverly Hilton International Ballroom is having a little work done.

Crystal chandeliers are being hung from the ceiling, where they’ll illuminate Jennifer Lopez, George Clooney, Dustin Hoffman and dozens more stars Sunday night. Workers on cranes are rigging the 16 cameras that will capture the action for worldwide TV audiences, and seating charts are being meticulously planned for maximum celebrity interaction.

By showtime, the ballroom will be beautiful, and veteran live-TV producer Barry Adelman and director Louis Horvitz say they’ll be ready for whatever the 70th annual Golden Globe Awards may bring.

“Because of Tina and Amy, we immediately have a fresh start,” said Adelman, executive producer.

Tina Fey and Amy Poehler - both Golden Globe nominees for lead actress in a TV comedy -will host the show. Producers gave the pair free reign to put their comedy touch on the ceremony.

Jodie Foster will receive the Cecil B. DeMille Award at the show, joining past recipients such as Walt Disney, Frank Sinatra, Barbra Streisand and Steven Spielberg. Robert Downey Jr. will present the award to the actress-director.

“They are very close friends and he has something special planned,” Adelman said.

Meanwhile, Adelman and Horvitz are putting the other finishing touches on their worldwide telecast, set to air live on NBC. AP