Still building his resume at age 100

Still building his resume at age 100 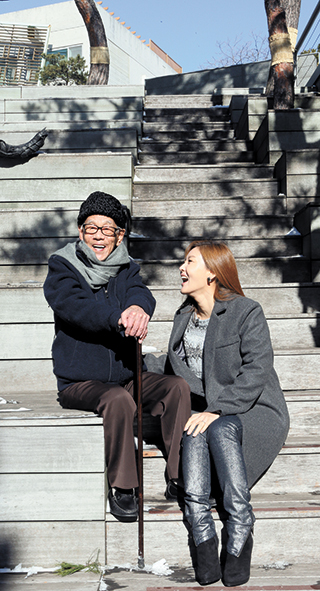 Music critic and composer Park Yong-gu chats with actress Kim Sun-young at Gana Art Center, northern Seoul. Kim will play the lead role of Aerang, the courtesan, in the upcoming revival of Park’s signature musical “Sweet, Come to Me Stealthily.” By Cho Yong-chul

Pioneering writer of Korea’s middle school music books. Korea’s first classical music critic and essayist. A master of dance. First composer of an original ballet in Korea and Japan. The first to produce Tchaikovsky’s “Swan Lake” and Verdi’s “Otello” in Korea. Music director of the 1988 Seoul Olympics. Longest-serving board director at the Foundation for Broadcast Culture.

These are some of the achievements on the resume of Renaissance man and artist Park Yong-gu.

Born in 1914, Park is at the ripe Korean age of 100, and as a man who’s devoted himself to the arts for nearly all of his life, he’s something of a legend.

Next month, his signature piece, the first Korean musical “Sweet, Come to Me Stealthily,” will be resurrected 47 years after its debut.

The quintessential production, which drew a whopping 16,000 people in its opening five-performance run in 1966, has gone down in history as the most-watched Korean musical.

Park’s masterpiece was a monumental fusion of traditional Korean sounds and Western orchestral music. It had it all: ballet, choir and traditional dances. With 100 performers, post-war Korea had never seen anything like it.

Award-winning musical actress Kim Sun-young, who has starred in productions of “Evita,” “Jekyll and Hyde” and “Elisabeth,” will bring life back to the Aerang, the courtesan played by Patti Kim in 1966.

Unlike the first time, the cast and crew are of international caliber, including director and choreographer Gustavo Zajac of the drama-turned-musical “Lovers in Paris.”

The script and song arrangements were all given a 21st-century twist and there will be 3-D technology and holograms.

On Jan. 4, Park met Kim Sun-young for the first time at the Gana Art Center in Pyeongchang-dong, northern Seoul, and sat down with the new leading lady for a conversation about his life, work and life lessons.

Kim: The new year’s just begun and you are 100 years old; I can’t even imagine what that feels like.

Park: I can’t, either (laughter). Looking back, the century I’ve lived through was dynamic to say the least. There were two world wars, and my life in turn wasn’t exactly a model for stability, either. Prison stint, fleeing to Japan, I’ve been through it all.

Kim: How did you maintain good health?

Park: I think it’s all to do with finding what works for you and sticking with it. Everyone is different.

It’s important to find your own rhythm. Right now for me, that means I go to bed at 1 a.m. and wake up about noon. In the afternoon, I read the papers and books, and about 5 p.m. or 6 p.m. I take a little nap.

From left: Park, third from right, with fellow musicians in 1947; with Japanese choreographer and director Komaki Masahide (right); at Mallipo, Taean, in South Chungcheong, with members of the Seoul Metropolitan Musical Theater in 1966; with the Park Sae-jick, head of the 1988 Seoul Olympics Committee; and with the late performer and choreographer Pina Bausch. [JoongAng Sunday]

When it’s warmer I go out to the park near my house and do some chin-ups.

Two years ago, I started having foot baths, too. This helps me sleep at night.

Park: I smoke three to four cigarettes a day. I used to go through 20 a day, but ever since I started noticing how bitter it tastes, I’ve cut down. I don’t drink, though.

In regard to the revival of his masterpiece, Park says he is excited and hopes to reach an international audience with the new production, which retains the same plot based on the traditional novel “Baebijangjeon.”

The original tale dates to the late Joseon Dynasty (1392-1910) and tells the story of Aerang, a gisaeng, or Korean courtesan, and Bae, a minister.

When he heard about the new production, Park wrote the staff a personal letter with the message, “Fly high far and wide into the world.”

Back in 1966, he wanted to see his production ride the Hallyu wave and captivate a worldwide audience.

This wasn’t to be, mostly due to the tumultuous political landscape at the time.

Kim: Tell me, during the Japanese colonial rule how did you discover your flair for the arts?

Park: When my country ceased to exist, at first I thought it my duty as a man to become a fighter for the independent movement. But as a student involved in the underground movement, I came to realize that risking my life wasn’t what I was called to do. I set out to discover the world and to do that I went to study music in Japan.

During the oppression, art was the only thing that kept me going.

Kim: I heard that you wrote “Sweet, Come to Me Stealthily” to outdo North Korea.

Park: Back then, South Korea wasn’t as wealthy as North Korea.

That was the time when President Park Chung Hee started the Saemaeul Movement.

At the same time, South Koreans were more discerning in their tastes than North Koreans.

Kim Jong-pil, then chairman of the ruling Democratic Republican Party, told me to make something and I decided to wow them with a musical.

In North Korea, they had never heard of blues and jazz, so I put that in.

Although we were under a military government, I got carte blanche to do what I wanted and so I was able to produce a satire about North Korea.

That’s what sets an opera and musical apart, there is room for parodies in musicals.

Kim: Why do you think the show was such a hit?

I think that’s why people liked her.

And I do think that the first requirement for a successful production lies in the opening act. Of course, in the musical the first scene consists of Aerang stripping a man.

The fact the theme song sung by Patti Kim began airing a month before the show opened helped, too.

Kim: Did you know Korean shows are a big hit abroad today. I know that’s what you always dreamed about.

Park: I heard that from April there will be a theater just for Korean musicals at Roppongi in Tokyo. I used to frequent that theater back in the 1950s. It’s so touching and just goes to show that you should dream big. Just look at Psy taking the world by storm. I hope that Hallyu will spread far and wide like that.

Art in the 21st century: “Symphoca”

Park sees the 21st-century art movement as doing away with boundaries and restoring humanity.

Just as the 16th century gave birth to opera and the 20th century to films, he says, the new era will bring forth a change in art.

Park dubs the burgeoning movement in art as “Symphoca,” short for symphonic art.

To put it simply, it’s a sort of hybrid form of performance and pictures.

New media, Park believes, will bring people around the world together and South Korea must rise to the challenge of bringing about this change.

Kim: You are 100 years old, but seem to be very progressive in your thinking.

With age comes wisdom and because you read so much you become open-minded. I am reading a book by a former classmate, Professor Han Woo-geun. He was of the opinion that Koreans aren’t native to Korea, but came from afar.

Kim: You seem to read a lot of history books. Is there a reason?

Park: The question I’ve been asking myself throughout life is, “Who am I?” It’s something that I’m always thinking about as I read.

Kim: And have you reached a conclusion?

Park: Kant and Herder were of the belief that there is one human race.

I like to think that I am a part of the founding races of Sumer; within the Sumer, Koreans were a part of the Akkad who traveled 500 years before settling on the Korean Peninsula, where they bred with the natives.

If I begin to think in those terms, I feel a sense of kinship with everyone from around the world. That’s what being in the 21st century is all about. If we all thought that way we wouldn’t see another world war.

Kim: Your question “Who am I?” is a touching and a profound one, and your speech brought tears to my eyes.

It’s not something that gets broached every day. I feel like my time with you has been like therapy.

Park: I feel the same way. The 21st century is marked by impersonal communication. It’s all through machines. Before computers, people used to meet in person, but now we have machines doing the talking for us so we feel lonely.

Regardless, “Who am I?” remains a crucial question to man.

Kim: We live in an age where the average life expectancy keeps increasing. What advice can you give to those who are entering into life as a senior citizen?

Park: In my case, I always work on a new project.

Recently, I read an article on [North Korea’s ruling family member] Kim Jung-nam’s son who is studying in Switzerland.

I was fascinated by his life and inspired to write a synopsis about a man from a dictatorship brought up in a democratic nation.

I wondered what kind of hardship he’d face upon his return to his motherland. It’s a comedy, and if my mind doesn’t go out on me this year I want to write it as a satire on North Korea.

Another project I’m eyeing is a 15-part series based during the dawning of our race. My dream is to have the story turned into a drama by the time [2018] Pyeongchang Olympics comes around.

Kim: You just don’t stop do you? You are amazing. As someone who’s lived through the turbulent 20th century and saw the dawning of the 21st century, how do you think the world will change?

Park: I think we need to devote more time to thinking of ways to get along in harmony. And I hope that Korea will play a part in paving the way. We can’t be like Japan, running away from the scene, but we need to keep a wide view.

Kim: Unfortunately, it’s time for me to go to rehearse, but can you give me some advice on how I should take on my character?

Park: You need to interpret the character to fit in with today’s times, an era of a female president. You need to unleash the power of females and their newfound place in history.carlasunwoo@joongang.co.kr