Credit scores are very hard to turn around

Credit scores are very hard to turn around 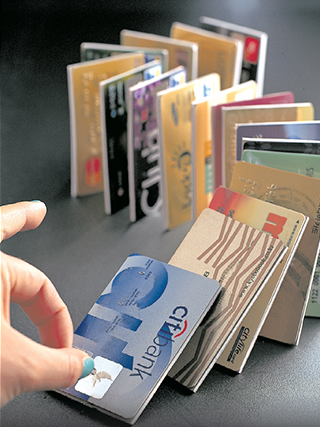 Kim Yoon-jeong, a 28-year-old company employee, was shocked when she tried to get a new credit card in December.

She was told by a salesperson at a credit card company that she needed to submit extra documents because she failed to pass the credit check.

She later learned her rating dropped because she didn’t pay her mobile phone and credit card bills before their deadlines several times.

Local credit raters evaluate individuals on a 1-to-10 scale, with 10 being the worst.

Some analysts say the current system is unfair to consumers and favorable to the financial institutions as it takes only five days for a person’s credit rating to drop while it takes up to five months for the rating to be restored, even after an individual repays all unpaid bills and loans.

When people’s credit scores fall from 7 to 10 they are classified as low-credit consumers and they will not get a loan from a bank or a new credit card.

If they need money, their only option is to go to so-called savings banks, which in Korea are consumer finance companies, and pay over 20 percent in annual interest.

In cases of people with credit scores of 5 or 6, they may be subject to paying over 10 percent in annual interest for loans or they can also be denied loans from major banks.

Kang said under the current system, a person who has a history of one overdue payment gets his credit rating slashed.

In June, NICE Information Service, a private credit rater, released 10 tips for managing credit ratings. It advised consumers to never miss a payment, even by a single day.

NICE said that when it evaluates credit rating for consumers, 40.3 percent of its entire score comes from the overdue payment history, the single most important criterion. In the case of the Korea Credit Bureau, another private credit rater, overdue payment history accounts for 25 percent of its credit rating, the second highest after the amount of debt held by the consumer (35 percent).

Analysts said Korean credit scores should focus more on reflecting the positive side of consumers as happens in other developed countries, which recognize how consumers have managed to pay back overdue payments and debts.

Credit evaluation took off in Korea in 2001 when the country was hit by a credit card crisis. In case of the United States, credit score evaluations have 100 years of history.

“Korea’s history of credit evaluation isn’t that long compared to countries like the United States, so it is quite behind in collecting the positive side of credit information about consumers,” said Kim Sin-sook, an spokesman for NICE Information Service.

In a separate but related matter, the transition team of President-elect Park Geun-hye said Thursday that it will try to overhaul the credit rating evaluation system to help relatively sound consumers get loans at low interest rates.

“We’re in talks about the details with the financial regulator,” said an official at the transition team.