Lotte Hotel Moscow, left, which started operation in 2010, was the first hotel Lotte built overseas. The Korean hotel chains plans to open its second global branch in Cebu, Philippines next year to achieve its goal to become one of the top three hotel brands in Asia by 2018. Provided by the hotel

Lotte Hotel, a local hotel chain run by Korea’s largest retailer Lotte Group, is beefing up its global presence by adopting a strategy that other domestic hotels rarely opt for: direct management of its hotel branch overseas.

Having recently set a goal of becoming a “top-three hotel brand in Asia” by 2018, Lotte is planning to apply the service know-how it has learned in the local industry to its overseas branches.

Lotte Hotel is a subsidiary of the nation’s fifth-largest company, Lotte Group. 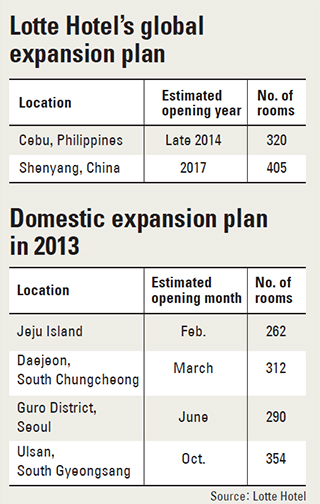 Lotte first tried this shift to direct management of an overseas branch in 2010 when it opened its first overseas hotel in Moscow.

After receiving rave reviews from travelers, the idea garnered more support within the group, and it has again decided to launch more hotels internationally. Other local hotel chains still haven’t followed suit.

Following the Moscow hotel, Lotte will open its second global enterprise in Cebu, Philippines next year. The 350-room hotel will be located at J Center Mall in Mandaue City. The high-rise mall is currently under construction.

To confirm the opening date of the hotel with the planned name of Lotte City Hotel Cebu, the officials of Lotte Hotel met with local representatives last week.

“As many international conferences or other events have been hosted by Mandaue City, building a new hotel there will give Lotte Hotel a boost to become a globally-recognized hotel chain,” said the hotel in a release.

Also, it is currently in talks to open a branch in Hanoi, Vietnam by next year, which will have 65 stories with 320 rooms. In 2017, it plans to begin operations in Shenyang, China as well, with a 405-room hotel.

“Although Shenyang is currently not as big as Beijing or Shanghai, we concluded that the city of Shenyang is one of the most actively developing cities in China and can have a promising future for us, based on our research,” said Lee Chan-yang, an official at the Lotte Hotel Seoul’s communication team.

The ambitious move to invest in hotels overseas was supported by the good reviews the chain received from globally renowned travel information outlets.

Conde Nast Traveler, a U.S.-based travel magazine, chose Lotte Hotel Moscow as a Best City Hotel in Russia last year. Trip Advisor, one of the largest online travel Web sites, named the hotel the Traveler’s Choice Winner last year as it is currently ranked No. 1 out of 231 hotels registered with the Web site in Moscow.

“Such evaluation proves that a service tested in the local market can work to serve customers overseas as well,” said the hotel in a release.

“Hence, Lotte is taking a leap to become a global hotel chain and to become one of the Asia’s top three hotels by 2018,” added Lee.

Currently, Asia’s top three hotel chains are Shangri-La, which has 72 hotel branches, Mandarin Oriental with 26, and the Peninsula, with nine, according to Lotte.

To push one of the aforementioned hotels into fourth place, Lotte plans to operate a total of 40 hotels, with 25 in Korea and 15 overseas. It now operates eight local facilities and one overseas.

To gather more service know-how, it will have numerous new hotels opening next year domestically, in Jeju, Daejeon, Ulsan and Guro District in Seoul.

The success it has seen from its newly built chains in Korea has further pushed it to actively expand its facilities all across the country.

While Lotte pioneers the practice of direct management, it is also considering licensing its name to other individual hotels overseas or making partial investments into newly-built overseas hotels, as it can be one way to spread its brand name without making as much effort as building its own accommodation facilities.

This measure has been popular among other local hotel chains as it takes less risk and investment to analyze how to accommodate customers in other countries as local agencies there will be taking care of management.

Lotte has been in talks with hotels in Uzbekistan regarding licensing or investment to expand its presence there, but nothing has been confirmed yet.

Licensing a hotel is common among multinational hotel brands as it is considered a good measure to promote the name. Global hotel chain Intercontinental operates its local unit in Samseong-dong, southern Seoul in cooperation with GS Group. Another global hotel chain, Sheraton, operates its local unit in Gwangjang-dong, northeastern Seoul with SK Group.

Whereas Lottel Hotel has received good reviews from its first ever overseas hotel operation, which has triggered its global push, not many other local hotels have shown interest in going global.

Many of them, including Shilla and the Imperial Palace Hotel, have agreed to take partial responsibility for hotel management in overseas hotels, but haven’t put in full investments to operate an overseas branch under their own name.

“How to provide the appropriate service is a key for a hotel to succeed, but it costs too much in preparation time and investment to analyze what service each customer in different countries wants,” said an industry source.

“Those high risks make it difficult for local hotel chains to go global.”