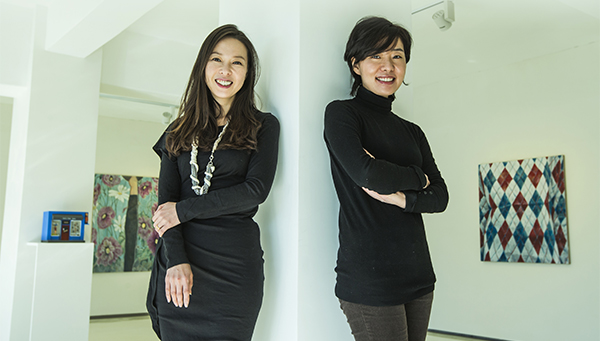 Bella Jung, left, and Lee Seung-min are co-directors of Gallery 101, which opened in December. By Kim Seong-ryong


Lee Seung-min and Bella Jung, both 39, declined to follow the tried-and-tested path in life. Instead of settling down early on, they decided to set out on their own and opened Gallery 101 near the German Embassy in Yongsan District, central Seoul, last month.

The two have built solid careers in this field, having both worked as directors at Kukje Gallery, one of the nation’s biggest commercial galleries, where they managed art exhibitions and dealt with artists and collectors. Jung also worked as the director of the Paris-based Opera Gallery’s Seoul branch and as head of the public relations team for the 2012 Seoul International Media Art Biennale.

Last year, though, they realized the time had come to open their own gallery, both Lee and Jung said when the JoongAng Ilbo visited Gallery 101 last week.

They explained they had growing anxieties over the last few years as they were coming to their 40s and younger competitors with degrees from overseas made the gallery management business more competitive. In addition, having one’s own gallery is seen as the ultimate goal by many people working in the art scene.

“I felt passionate sympathy from the two owners of this gallery unlike the cold business mindset I experienced from people at many other galleries,” Kim said.

Another popular artist, Lee Myoung-ho, also had praise for the new gallery.

“I prefer a long run to short-term success, so I like a gallery that has profound understanding of artists and shares more pleasure than money with artists,” said Lee, a young photographer known for his “Tree” series. He is preparing an exhibition at Gallery 101 slated for May.

The new business seems to be a success for the two owners as well.

“I’m happy now as I’ve found my own colors that I had to restrain as an employed gallery manager and am utilizing my own abilities,” Lee of Gallery 101 said.

“Now I have more self-confidence and a stronger sense of responsibility,” her colleague Jung added.

They said they would be real friends of artists, especially those who are vulnerable to mental wounds and monetary losses that occur in the trade of their works.

“We feel this gallery is not only our workplace but also our playground,” the two noted.

Gallery 101 already has filled its schedule for the first half of 2013. A furniture design exhibition will start next month, a solo show of painter Choi Woolga is scheduled for April and in May a joint exhibition of Lee Myoung-ho and Dutch video artist Robert Overweg will start.