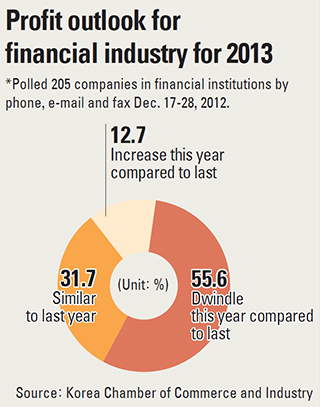 More than half of the financial institutions in Korea believe they will have a rough year and they will rake in smaller profits compared to 2012.

They cite low economic growth and low interest rates, coupled with snowballing household debts as main factors, a survey by the Korea Chamber of Commerce and Industry (KCCI) showed yesterday.

A survey which polled 205 financial institutions - banks, credit card companies, brokerage companies and insurance companies - showed only 12.7 percent of companies responded they will have a better year compared to last year in terms of earning profits.

More than half, or 55.6 percent, of companies said their profits this year will dwindle compared to last year’s, while 31.7 percent said they are likely to earn profits similar to last year’s.

“Externally, uncertainties stemming from the euro zone and U.S. fiscal crisis still remain,” said Kwon Hyeok-bu, an official at the finance taxation department of the KCCI.

“And risk factors, including concerns for low-economic growth, the sluggish real estate market and household debt problems are likely to negatively impact the local financial market.”

When asked the reasons behind their gloomy business outlook for this year, nearly 40 percent of financial institutions point to Korea’s low economic growth and widespread low interest rates in the banking sector as the biggest factor (37.7 percent), which has made them increasingly skeptical of high profits, followed by increasing household debts (26.3 percent), the ongoing financial crisis in the euro zone (20.2 percent), heated competition in the local financial market (11.4 percent) and the government’s toughened regulation on the financial market (4.4 percent).

Among financial industries, banks seem to have the most grim outlook on their performance this year, as 71.2 percent of banks said they think their sales will shrink compared to last year’s, followed by credit card issuers (66.7 percent), local brokerage companies (52.9 percent) and insurers (45.3 percent).

“The increase in the default rate in household loans caused by customers who are unable to repay their debts in the stated period of time in addition to the rise in cancellations of deposits ahead of agreed maturity dates caused by cash-short customers are headaches for banks these days,” said a banker surnamed Kim.

Local brokerage firms find the global economic slowdown as a major contributor to lead the shrinkage in the local stock market.

Insurance firms said heated competition in the industry and the increase in cancellations of insurance policies due to the economic slowdown and dwindling number of newly signed insurance policies are major factors holding back growth this year.

“Given that external and internal uncertainties surrounding the economy are large, it is very crucial for financial institutions to hammer out management strategies to cope with low economic growth and low interest rates,” said Jeon Su-bong, a KCCI official in charge of the survey.

“For financial institutions to take a step forward, they must develop financial products that are distinct from existing products. They also need to diversify their revenue sources to improve their financial soundness.”