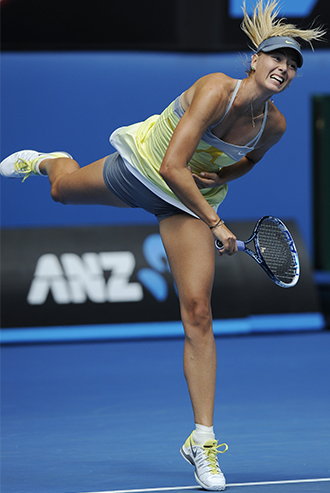 Russia’s Maria Sharapova serves to compatriot Olga Puchkova during their first round match at the Australian Open tennis championship in Melbourne, Australia, Monday. Sharapova won in a rare double-bagel. [AP/YONHAP]

MELBOURNE - Maria Sharapova and Li Na crushed hapless opponents Monday to storm into the Australian Open second round, making their intentions clear as they bid for more Grand Slam glory.

Sharapova, the reigning French Open champion who was hammered by Azarenka in last year’s Melbourne final, was at her dominant best against fellow Russian Olga Puchkova at Rod Laver Arena.

Sharapova, the champion in 2008, powered through 6-0, 6-0 in just 55 minutes and will next play either Croat Petra Martic or Misaki Doi of Japan.

Radwanska, who won lead-up events in Auckland and Sydney, was pushed hard by Bobusic in the first set before winning 7-5, 6-0. Ninth seed Samantha Stosur also advanced to the second round.

Second seed Sharapova came into the season’s opening Grand Slam with no competitive matches under her belt after a collarbone injury forced her to miss the Brisbane International.

“I didn’t want to focus on the fact I hadn’t played a lot of matches, just wanted to focus on what was ahead of me and really concentrate and be aggressive,” said the Russian, who has won four Grand Slams.

Wearing a summery yellow dress and matching shoelaces, the 25-year-old won her opening serve then broke her 107th-ranked opponent to take a 2-0 lead.

Li, who complained of fatigue in the lead-up to Melbourne, also was in fine form to set up a second round clash with Olga Govortsova of Belarus.

The 2011 French Open winner seized control by breaking for 3-1 and then 5-1 to take the opening set with ease. Karatantcheva made her work harder for the second set, but her resistance ultimately proved futile.

“It’s always tough in the first round. You just come to the court 50/50. You never know whether you can beat her or you can lose. Everyone is the same,” said Li.

Venus Williams has dropped in the rankings and seeded 25 here as she works her way back after illness.

She has not won a Grand Slam singles title since 2008 at Wimbledon, but looked strong against Voskoboeva.

“I don’t think my opponent quite got the hang of it. It’s hard to play the first match in a major, first thing of the year, and that can be a lot of pressure,” she said. “I did my best to just close it out.”

It set her up for a second round clash with either France’s Alize Cornet or New Zealand’s Marina Erakovic, and a potential third round showdown with Sharapova. AFP