Mitsubishi hopes for success via TicketMonster

Mitsubishi hopes for success via TicketMonster 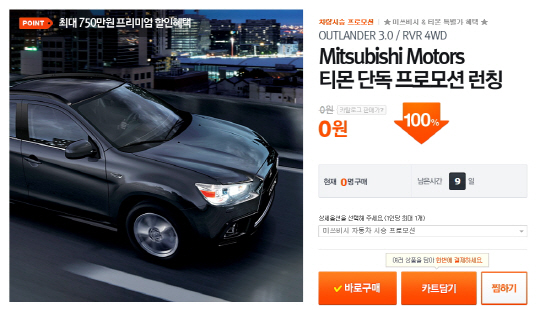 In an effort to jumpstart lagging sales, Mitsubishi will launch a second promotion in conjunction with TicketMonster, the online discount site said yesterday.

As part of the deal, the carmaker will offer two models - RVR 4WD and Outlander 3.0 - until Sunday with a maximum discount of 7.5 million won ($7,100) from the original retail price.

Mitsubishi has been the worst sales tally among mainstream foreign auto brands since it came to Korea last March. According to the Korea Automobile Importers and Distributors Association, only 81 Mitsubishis were sold last year, lower than even super luxury brand Bentley.

CXC Motors, an official importer of Mitsubishi in Korea, turned to TicketMonster to tackle its sales drought last November, the first time that automobile brand tried to sell cars through the daily deal site.

TicketMonster said the first promotion turned out to be successful as 20 Mitsubishis were sold in December, a 250 percent increase from the previous month. It was also a monthly sales record for the Japanese auto brand in Korea.

“Mitsubishi and TicketMonster’s first promotion that targeted young social commerce customers was successful, and we also have high expectations for this next deal,” TicketMonster said in a release.

Car industry observers said that although this is a fresh way of selling vehicles to young customers, it can also depreciate brand value and anger previous customers who purchased vehicles offline without discounts.

Others suggest that the movement is part of an exit plan for CXC Motors as it aims to offload remaining inventory. CXC Motors has been at the center of speculations saying that it will shut down its imported car business in Korea following poor sales.