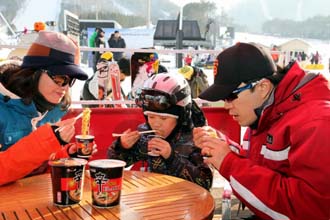 Buoyed by the winter sports season, consumption of instant noodles has spiked, with the monthly sales of Nongshim’s noodles for last December exceeding 40 billion won ($38 million) for the first time.

Nongshim, the country’s largest processed food manufacturer, said an analysis of last year’s noodle sales showed that the figure for December stands at approximately 41 billion won, the highest monthly figure the company has ever seen.

The figure is 15 percent higher than that of the summer peak season, pointing to the impact weather has on sales figures, Nongshim said.

“In addition to the growing number of thrifty consumers, cup ramen products are popular as consumers prefer to enjoy hot noodles during the cold weather rather than during the summer, especially when they go on outdoor activities such as skiing and hiking,” said a spokesman for the company.

In line with the growing crowds across the country for winter festivals with the opening of ski resorts and the start of winter vacations, sales of warm cup noodles that can be easily consumed outdoors in the cold weather reached a peak in December, Nongshim analyzed.

Instant cup noodles have always been among the top-five sellers at convenience stores in ski resorts since 2011, along with beer, soju, bottled water and snacks, according to CU, the nation’s largest convenience store chain. But the food has enjoyed even increased higher popularity as of late.

Nongshim cited the increasing number of thrifty consumers buying cup noodles at ski resorts as a reason for the surge.

In order to respond to these trends, Nongshim is holding various events at ski resorts, such as offering 20,000 free packs of Shin Ramen Black cup noodles for one month at Yongpyong Ski Resort in Pyongchang, Gangwon.