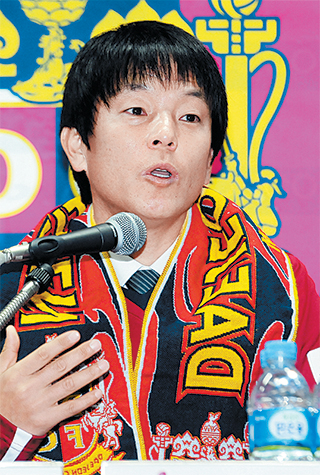 The Daejeon Citizen finished last season in trouble - just two places clear of the new relegation zone - and improved performance will be a matter of survival for the club in the league.

The top league, now calling itself K-League Classic, is planning to send two more teams to the second-division league at the end of the year after two others met that fate last year.

The Citizen’s desperate efforts to turn things around seemed off to a rough start, with the team losing out to the Suwon Bluewings in a competition to bring Jong Tae-se, a North Korean national team striker, from FC Koln of Germany.

In the last of a five-part series of Ilgan Sports interviews with new K-League coaches, Kim In-wan, head coach of the Citizen, said that he will not make sugar-coated pledges about the team’s future and will try his best to pull the club out of relegation’s way.

He also promised to get back at the Bluewings by keeping Jong and Bluewings coach Seo Jung-won in check. Seo, who is new to the team, was Kim’s fiercest rival for the spotlight when the two led offense for the Olympic team in the 1990s.

Q. It has been a month since you took the helm in Daejeon. What do you aim to teach players?

A.Our team is going through a rebuilding process. Without thorough training, we can’t win a game. I am stressing the importance of consistent effort and self-trust to players. If talent were all that counted, even I couldn’t have come this far. [Kim was a striker for the Olympic team and retired in 2001.]

How do you feel about players who have left your team or chosen others, such as Kevin Oris (a Belgian striker who moved to the Jeonbuk Motors this week), Kim Hyeung-bum (a midfielder who returned to his home team Gyeongnam FC after playing on loan for Daejeon last season) and Jong Tae-se?

It would be a lie if I said I had no lingering regret. A striker that can score 16 goals a season like Kevin is rare. Kim Hyeung-bum is a good player as well. As for Jong Tae-se, the president [of the Citizen Jun Jong-gu] himself went to Germany to try bringing him in. I appreciate his efforts. Many of the remaining players with the team are undervalued, and they will do their part for the team. We will focus on teamwork through winter training. In games with Suwon, we will try to keep Jong Tae-se in check and keep him from even kicking the ball.

A month ago, you set the goal of getting out of the relegation zone. Has anything changed?

To speak frankly, Daejeon and Gangwon FC [the 14th place team last season] are the two teams most likely to be relegated. But if we escape this danger, the goal will change.