From left: Chunhwa by Shin Yun-bok, from the book “Geongonilhoecheop,” and Kim Hong-do, from the book “Wunwudocheop,” are on display at Gallery Hyundai. Provided by the gallery

Titled “The Guy I Was With Last Night,” the poem is an example of sijo, a traditional Korean lyrical form consisting of three long lines. Lee was one of the first Joseon intellectuals to write informal sijo.

Although the Joseon era was known to have been extremely conservative about men and women and their relationships, historians say that with the introduction and spread of commerce, Confucian-based customs and values were shaken, as Lee’s poem demonstrates. 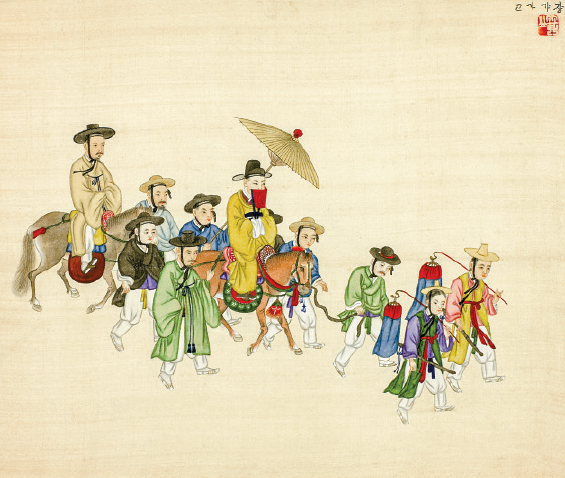 A groom on his wedding day by Kim Jun-geun. Provided by the museum

The names of the two books are “Wunwudocheop,” “The Album of Cloud and Rain Painting,” from the 19th century, and “Geongonilhoecheop,” “The Album of the Joining of Heaven and Earth,” from 1844. Experts, including You Hong-june, professor of art history at Myongji University and a renowned writer and commentator on folk art, say the paintings from the book are of high quality and well-drawn compared to other chunhwa from the period.

One of the highlights is Ahn’s “Pyeongsaengdo,” “Pictures of the Human Life,” which is a series of 10 images illustrating the most memorable moments in the life of a successful nobleman. They include feasts to celebrate one’s first birthday, a wedding, receiving the top score in the state examination to pick public officials, assuming a provincial governorship and a 60th wedding anniversary. While there are pyeongsaengdo made by other artists, Ahn’s version is being shown to the public for the first time.

There is yet another “first” in this exhibition: 50 paintings made by commoner Kim Jun-geun. More than a thousand paintings by Kim are known to exist around the world, which prompted gallery officials to dub him the pioneer of Hallyu. 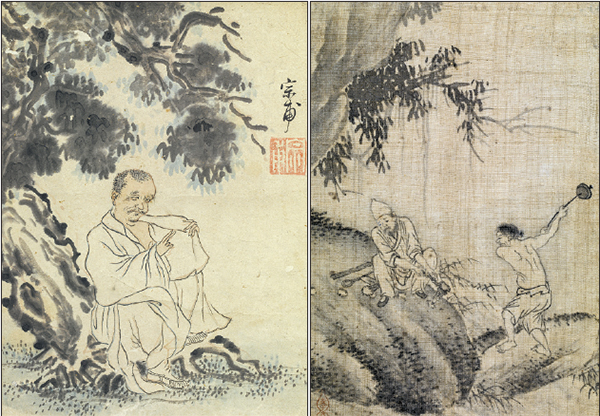 From left: Late Joseon era paintings show an old monk ridding himself of lice by Yun Du-seo, and stone masons at work by Jo Yeong-seok. Provided by the museum

Working mainly in Wonsan, in the North Korean province of Kangwon and one of the first Korean ports opened to the outside world, Kim painted from the late 19th to early 20th centuries for foreign travelers who visited Korea on their journeys to China and Japan and wanted to take home some souvenirs.

You of Myongji did express a tad of regret that Kim’s paintings were not of better quality. Although Westerners did get a glimpse of the daily lives of Korean people through Kim’s work and something to remember Korea by, his paintings were intended for mass distribution rather than the houses of the wealthy.


“Refined and Tasteful Life of the Joseon Dynasty” runs until Feb. 24 at the main building of Gallery Hyundai plus Dogahun, another exhibition venue run by the gallery nearby. Both venues are close to exit No. 1 of Anguk Station (Line 3) or exit No. 5 of Gyeongbok Station (Line 3). Admission is 5,000 won ($4.74). For more information, call (02) 2287-3591 or visit www.galleryhyundai.com.