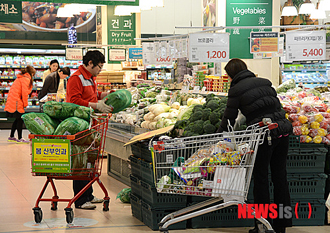 Living conditions for Korea’s lower class are getting worse, and skyrocketing fresh food prices are one cause.

According to a report by Hyundai Research Institute (HRI) released yesterday, the Engel’s coefficient for the lower 20 percent income class in the third quarter was 23.4 percent.

This is the highest rate since the data has been complied.

“This shows that the polarization of wealth is widening and therefore creating some kind of measures to prevent fresh produce prices from surging is urgently needed.”

The Engel’s coefficient is an economic indicator assessing living conditions by calculating how much is spent on necessities, including food. The higher the rate, the more of their disposable income people spend on daily necessities.

The fact that daily necessities take up one quarter of total spending for those in the lowest 20 percent shows that living conditions for them are tight.

Although the latest overall inflation growth remained within the government’s target, food prices have continued to surge, especially with the cold weather.

Because of the bitter cold, prices of cabbage, which is used to make the popular staple kimchi, surged 193 percent on-year.

Spending on food by people in temporary or hourly jobs was 31 percent of their total monthly spending last year.

The elderly spent 35.5 percent of their income on food, while those with physical or mental challenges spent 29.7 percent, the report showed.

“Instability in the consumer prices of food, especially for those in the lower income classes, will lead to a vicious cycle of shrinking household spending that will also affect economic growth,” Kim of HRI said.